Salvatore Cimmino To Speak In Miami 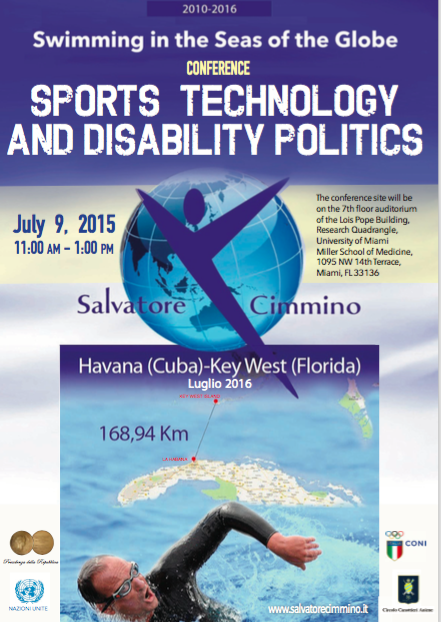 Salvatore Cimmino of Italy possesses a rare amount of courage as an endurance athlete and a deep-seated passion to help others with a disability.

His willingness to seek new goals is relentless.

He has planned, organized and completed solo swims from the Cook Strait in New Zealand to around Manhattan Island in New York, from Israel’s Sea of Galilee to Mexico’s Cañón del Sumidero, from the Paraná River in Argentina to Lake Kivu in the Democratic Republic of the Congo – all with the concrete goal of giving a voice and giving opportunities to individuals around the world with disabilities.

Cimmino will speak about his A Nuoto nei Mari del Globo (Swimming in the Seas of the Globe) campaign and his latest goal to swim from Cuba to Florida in Miami, Florida on July 9th at the University of Miami. Cimmino had his right leg amputated at the age of 15 due to cancer and began swimming later in life for therapeutic reasons before turning it into a passion for raising disability awareness.

His presentation at the Sports Technology and Disability Politics Conference will coincide with his planning and organization of an international crew of experienced mariners, physicians, volunteers and advocates who will help him cross the very difficult 168 km Strait of Florida in 2016.