Sam The Iceman’s Pursuit Of The Open Water 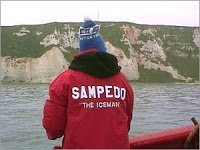 Sam, a Special Olympics athlete from Northern California who trained for an English Channel attempt in 2002, enjoys swimming in cooler waters.

After becoming friends with the competitive and collegial open water swimming community in San Francisco Bay, Sam became a regular in San Francisco Bay, training at the South End Rowing Club and even picking up a nickname, Sampedo — The Iceman, for his ability to swim well in the 55-63° F (13-17°C) waters throughout the year.

Coached by Bob Placak, Sam did not quite complete his dream of crossing the English Channel, but his effort was not diminished in any way. Bob recalls after coaching Sam in the Channel, “He has grown not only as a swimmer, but also as a human being in his endeavor to cross the English Channel. I am very proud of him.”

With the Special Olympics open water swimming community really coming into its own under the leadership of Kester Edwards, Sam will continue to have plenty of opportunities to show his stuff.