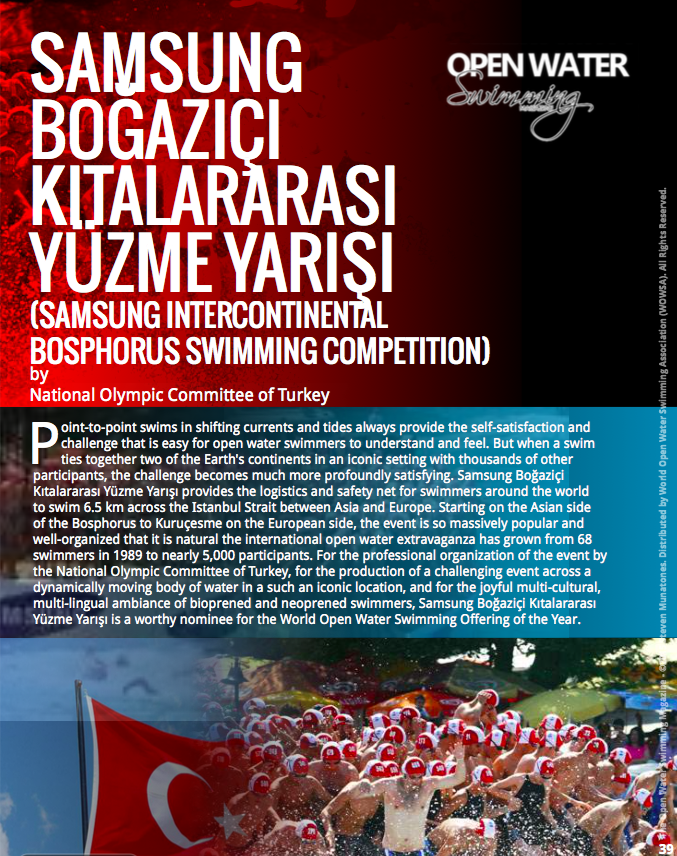 One can define channel swimming to be at least 200 years old. With Lord Byron crossing the Hellespont in 1810, his 1 hour 10 minute crossing of the strait in Turkey connecting the Aegean Sea to the Sea of Marmara set the bar and the tone of crossing bodies of water.

As the generations passed, more and more people were attracted to the challenge of crossing from one shore to the other.

There is no international event like the Samsung Boğaziçi Kıtalararası Yüzme Yarışı or the Bosphorus Cross-Continental Swim, organized by the National Olympic Committee of Turkey.

It is an extravaganza of swimmers, an ambiance of aquatics that brings together swimmers from 49 countries and many different cultures.

It is nominated fro the 2015 World Open Water Swimming Offering of the Year:

Point-to-point swims in shifting currents and tides always provide the self-satisfaction and challenge that is easy for open water swimmers to understand and feel. But when a swim ties together two of the Earth’s continents in an iconic setting with thousands of other participants, the challenge becomes much more profoundly satisfying. Samsung Boğaziçi Kıtalararası Yüzme Yarışı provides the logistics and safety net for swimmers around the world to swim 6.5 km across the Istanbul Strait between Asia and Europe. Starting on the Asian side of the Bosphorus to Kuruçesme on the European side, the event is so massively popular and well-organized that it is natural the international open water extravaganza has grown from 68 swimmers in 1989 to nearly 5,000 participants. For the professional organization of the event by the National Olympic Committee of Turkey, for the production of a challenging event across a dynamically moving body of water in a such an iconic location, and for the joyful multi-cultural, multi-lingual ambiance of bioprened and neoprened swimmers, Samsung Boğaziçi Kıtalararası Yüzme Yarışı is a worthy nominee for the World Open Water Swimming Offering of the Year.