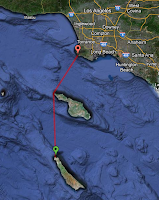 An experienced team with thousands of solo swimming miles under their caps set a new record today in the Pacific Ocean.

The HTC Relay broke the record of the Swim for Hope relay set in 2002 in 33 hours 8 minutes. From start to finish of the 52 statute mile (83.6 km) crossing, each member swam in one-hour rotations in a swim sanctioned by the Santa Barbara Channel Swimming Association with Don van Cleve and Carol Sing as observers.

“We are pleased to announce our first successful relay swim of the 2012 season,” said Evan Morrison, board member of the Santa Barbara Channel Swimming Association that is preparing for a busy July, August and September. “The HTC Relay swam from San Clemente Island, around the western edge of Catalina Island, to the California mainland at Cabrillo Beach.”

Information and image of the HTC Relay course (rounding Catalina Island) is courtesy of Evan Morrison of the Marathon Swimmers Forum, a board member of the Santa Barbara Channel Swimming Association. The Google Earth image shows the shortest-line distance finishing at Pt Vicente, although the HTC Relay actually finished at Cabrillo Beach.