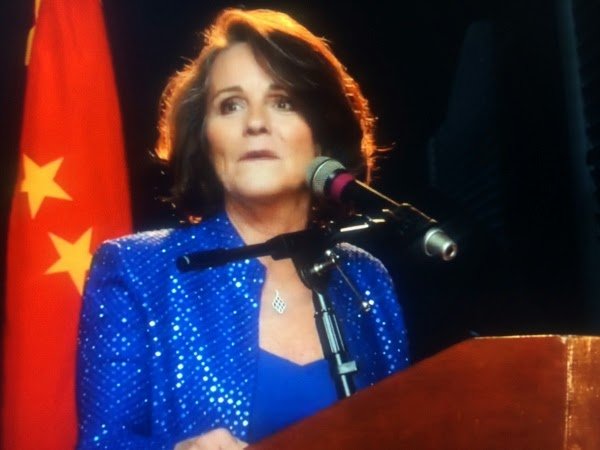 Sandra Bucha was honored last weekend by the International Swimming Hall of Fame as one of its relatively few Honor Open Water Swimmers.

She will be similarly honored at the Mount Stuart Castle on the Isle of Bute in Scotland at the 2014 Global Open Water Swimming Conference and International Marathon Swimming Hall of Fame induction ceremonies.

This is her background and this is her message of appreciation and inspiration:

In the world of professional marathon swimming, 4 women have stood out among their male rivals: Greta Andersen, Judith van Berkel-de Njis, Shelley Taylor-Smith, and Bucha.

Bucha was a star throughout her swimming career in the 1970’s. Ever smiling and hardworking, she appeared on the cover of Swimming World Magazine as a promising age-group pool swimmer and enjoyed an outstanding 3-year career as a professional marathon swimmer while studying history as an undergraduate student at Stanford University.

Between her formative years as a young swimmer and before her college career, she and her father, Colonel Paul Bucha Sr., filed a lawsuit against the Illinois High School Federation based on sex discrimination. Their lawsuit went to the Illinois Supreme Court that ultimately ruled that girls deserved equal opportunities to compete in competitive sports on the same level as high school boys. This lawsuit, which was an early precursor to Sandra’s later legal career as prosecutor, public defender and personal injury attorney, resulted in the state of Illinois offering separate competitive sports programs for girls.

Bucha’s rival was her own American teammate, one of the fastest and most prolific marathon swimmers of all time, Olympic gold medalist John Kinsella. Both distance swimmers got into marathon swimming after the 1972 Munich Olympics. While John won a gold medal in Munich to add to his 1968 Olympic silver medal, Bucha’s pool swimming career came to an end when she missed the U.S. Olympic Team by a 7 tenths of a second in the 100-meter freestyle.

The former American record-holder in the 200-meter freestyle set off on an unprecedented marathon swimming career. Her first swim was the 1973 10-mile Chicago Lake Front race where she placed second overall finishing only a minute behind Johan Schans of the Netherlands. She won US$3,000 while setting a record for women as a college freshman. She won a bonus of US$1,000 for being the first woman after finishing second overall to John Kinsella. She teamed up with Kinsella at the 24 Heures La Tuque race, swimming 100 loops to John’s 94 for a world record of 194 laps or nearly 65 miles.

In her second season, she competed in the 1974 Traversee internationale du lac St-Jean where she finished third overall in 8 hours 19 minutes to Kinsella (1st) and Veljko Rogošić (2nd). She also finished second at the Laval (Quebec) 10-mile Pro Race. In her third season, Bucha finished second overall in the 10-mile pro marathon, again to Kinsella. She joined Kinsella to win the 1975 24 Heures La Tuque again and traveled to lac St-Jean to finish second overall again for her 8 hour 15 minute effort.

During her short career of 3 seasons sandwiched between 9 months of academic work at Stanford, Bucha wanted to see women separated from the men as long as the purses are equal, but that dream would not come for nearly two decades. She ended her 9-swim career with 9 wins among the women and 6 overall second places. Only three males finished ahead of her in her in nine marathon races.

The former American 200m freestyler record holder will also be honored by the International Marathon Swimming Hall of Fame at its induction ceremonies in Scotland on September 19th-21st at the 2014 Global Open Water Swimming Conference.