Sandra Denius Wright is the Tourism Special Projects Coordinator of Alleghany Highlands, Virginia. She had a dream about the open water that will be come true in 2013.

It is a heartwarming story. One that begins in her childhood.

Denius grew up in the Alleghany Highlands in the state of Virginia known for its breathtaking mountain scenery and charming towns.

“Most swimming [when I was a child] was done in the open water so open water swimming always made sense to me. I was always comfortable in lakes and rivers even though I was on more than one occasion chased by a swimming snake and had my toes nibbled on by fish in the lake.

Marine life never stunted her love for the water. “My dad, an avid swimmer, encouraged me and my siblings to swim. We always thought it was fun to see how many we could do. When we were in the lake, it was a challenge to see if we could swim from A to B. Sometimes my dad would let me jump out of the boat pretty far out in the lake and swim to shore.”

However much Denius swam in her childhood, she had never heard about open water swimming until she moved to college at Virginia Commonwealth University. “I was pretty naïve about a lot of things. While life guarding at the YMCA, I was fascinated and inspired by Missie Hersey who used to swim nonstop during my entire shift as she trained for the Manhattan Island Marathon Swim. I thought she was amazing. Missie, along with John Ferrell, encouraged me to train for and enter my first swim, the Great Chesapeake Bay Swim in 1993. I enjoyed it so much that I finished the 7.5-mile Potomac River Swim in 1994. In 1995 I was the first woman at the Death Valley 5K at Clemson, South Carolina. I wouldn’t have done any of the swims if it weren’t for John who always made things fun with his great enthusiasm and good spirit.”

But Virginia Commonwealth University disbanded its swim team just before Denius arrived on campus so she ended up swimming by herself with an occasional masters swim team workout. “I made a few great friends at college, but spent a lot of time swimming, running and biking by myself.” Her training gave her a lot of time to think and explore.

And when she first saw Lake Moomaw, her dream came to her.

“Lake Moomaw is one of the most beautiful lakes you will ever see. I’ve always enjoyed swimming there so after I became aware that there were people who swam these types of races I thought it would be a perfect venue. In 1997 I wrote a letter – which I still have – proposing a 1- and 3-mile swim at Lake Moomaw. I never got a response. I felt like no one understood my passion for swimming. So I just moved on to other things keeping a file with my ideas for the Lake Moomaw race.”

She never gave up on her dream.

“I thought I could revisit the idea of the Lake Moomaw at some point [in my life]. I have moved numerous times and would get rid of things with each move, but I could never bear to throw out the file with my proposal and ideas for the Lake Moomaw swim. I kept hoping someday…”

But her dreams remain quiet until a career opportunity led to her passion pouring out in a job interview. “I didn’t tell anyone of this dream until until recently when I told a room full of people during an interview for the position of Blueway Special Projects Coordinator, Alleghany Highlands.” The interviewers posed a question about how best to develop and promote the lakes, rivers and streams of the area and how to work in tandem with other tourism-related projects. “I talked about my ideas for various outdoor events. I thought it was a perfect opportunity to convince people that an open water swim event at Lake Moomaw is a terrific idea…I got the job.” 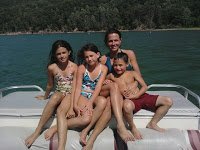 Denius is enjoying a lot of momentum in the area with plenty of support from her friends and neighbors. It is truly a dream come true. “I feel so excited and happy. Five years ago, I moved back to the area with my three children, who also love to swim. There are a lot of great things are happening. But none of this would be possible without the Alleghany Foundation and The Alleghany Highlands Chamber of Commerce and tourism which are committed to making positive changes for our community and local businesses.

Dave Holland, a local U.S. Masters Swimming representative, visited Lake Moomaw and agreed that the lake is an ideal location for the Lake Moomaw Swim, a 1-mile event that will take place on August 3rd, 2013 amid the beautiful mountain landscape.

Denius’ dream, 15 years in the making, will be followed throughout 2013. Stay tuned.