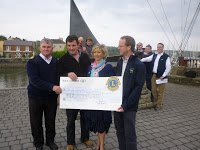 This week on the south coast of Ireland in one of the emerging global hot spots of marathon swimming, the organizers of The Edge Sports Sandycove Island Challenge Swim, together with Cork Lions Club President Teresa Dineen with members and friends of Cork Lions Club, presented a donation for €1000 towards the funding of the Lost at Sea Memorial.

The Memorial is a place of Remembrance to all those who sailed from the Port of Kinsale and who were unfortunate to have lost their lives at sea. Over the years, many people from Kinsale were members of the Merchant Navy, Naval Service, fishing community and sailors who travelled over the globe on the high seas. Some of these people never returned, having been lost at sea, and it is in their memory that the Memorial was erected.

Initially, on the suggestion of an old Kinsale seafarer, Gerald Gimblett, some fishermen erected an anchor and plaque at the Pier in the 1980’s as a Memorial, but subsequent to the loss of a local fishing vessel, the Honeydew II in 2007, the memorial expanded to a model of a Kinsale Hooker fishing vessel.

The chairman of the Lost at Sea Memorial commented, “The next phase will see the re-erection of the original anchor, together with the placement of an electronic touch-screen display kiosk. Funding is well under way and with the generous support of the Sandycove Island Challenge Swim, the Committee has reached half-way in their target of €7,000 to complete this phase. The electronic kiosk will give the public access to information such as the names of seafarers lost at sea, the vessels they were on, where they were lost, and information on the Port.”

Ciaran O’Connor of Cork Masters Swimming Club said, “I was delighted to be in a position to support the work being done for the Lost at Sea Memorial Project and also wanted to recognise the contribution that Kinsale Harbour Master, Captain Phil Devitt, has made over the years to the safe running of the Sandycove Island Challenge Swim.”