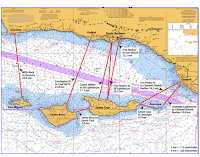 Recollections, memories, comments and stories from each of the swims were shared over a Mexican dinner in San Pedro, California.

During Alan‘s swim from Anacapa to the California mainland in 6 hours 59 minutes, a sea lion literally jumped over him as he was swimming. But he was not scared but the sea lion kept jumping over him thru out the swim.

During Tina‘s 19-mile swim from Santa Cruz to the mainland in 10 hours 33 minutes, “it was messy.” She did a bit “of body surfing and my kayakers caught some nice waves..”

Lynn Kubasek was “nervous up until the day of [her 7 hour 8 minute] swim. I had trained in all kinds of conditions, but was 66°F (19°C) and glassy. The jellyfish were everywhere. I was stung a lot for three and a half hours, but I heard and saw the dolphins…a perfect day.”

Jim Neitz did two Anacapa Islands swims (10:23 in May and 10:43 in September) along with his successful English Channel and Catalina Channel crossings. “[Kayaker] Tom Ball never left my side on my three swims [in the Pacific Ocean] this year and motivated me with his ‘YOU KILLED IT!’ cheer, just at the right moment.” His second swim was like a “Sponge Bob’s petri dish – absolutely filled with jellyfish – and he was headed in the wrong direction. “It was a great swim, I loved it. I had a Plan A and a Plan B, but we had to resort to Plan C in the 55°F (13°C) water.”

Forrest Nelson was introduced by Scott Zornig as one of the greatest marathon swimmers in the world today. Forrest was recognized for his 48-mile 25 hour 35 minute circumnavigation around Catalina Island. “I was nervous at the start and estimated the swim might be 35 hours, plus or minus 5 hours. Dropping below 10% of my natural 55 stroke-per-minute pace was a sign of trouble. But I dropped to 42 strokes per minute during the swim. No wonder it felt long and smooth. I hallucinated for the last part of the swim and 24 hours after the swim was over.”

A mind-boggling swim, literally and figuratively.

Marcia, as were the others, were grateful to the Santa Barbara Channel Swimming Federation volunteers. “We could not do what we do without the volunteers and organization. [After all the work], it is always terribly satisfying to get through the swim and put your feet back on terra firma.”

Her swimming partner, Chris Layton said that he thought of jellyfish stings helped him generate heat, a clever mind game to help get through the 6-hour swim that was strewn with the stinging creatures of the Pacific. “I was literally counting my strokes to see how far I could get without being stung. At one point, I swam for 87 strokes in a row without getting stung. But every other time, it was constant stinging in the 60°F (15°C) jellyfish pond where we got stung constantly every 5-10 seconds.”

Observer Dave Van Mouwerik said Chris and Marcia were joined at the hip throughout their 6-hour swim. Dave, who can eloquently and colorfully describe channel swimmers with the best of them, called the swimmers “heroes in the seaweed.”

No truer words were spoken. 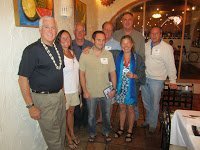 Footnote: The Santa Barbara Channel Swimming Association has grown from 300 people to over 900 individuals during the past year. The mission of the Association is to govern swims to, from, around and between seven Channel islands. Between some of the Channel islands, local refer to the Shark Alley due to the number of sharks. The longest non-double solo swim from a Channel island was Penny Palfrey’s 37.5-mile swim from Santa Barbara Island to the California mainland. There are still many swims that have never been attempted or achieved n the Santa Barbara Channel – 35 possible swims to be exact.