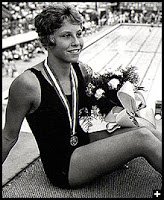 SANTA CLARA, CALIFORNIA. Santa Clara Swim Club has one of the richest traditions in the history of amateur athletics. Swimmers from the club won 51 Olympic gold, 17 silver and 11 bronze medals.

But it roots are partly in the open water. Starting with 13 swimmers, the team initially practiced at Santa Clara High School and various other swimming holes including the Stevens Creek Reservoir.

Swimmers recall the distance from the face of the dam to a specific tree was 500 yards.

They shared the water with frogs and other denizens of the dam.

From those humble beginnings, the team grew and rose in prominence as it built its own pool where 23 world records, 35 American records and 64 foreign national records have been set numerous major swim meets.

One of the team’s greatest swimmers, Olympic gold medalist Donna de Varona (shown above), wisely stated on her career and the legacy of the Santa Clara Swim Club, “Life is a series of struggles. Once one struggle is over, you prepare for the next one. To try to avoid struggle is trying to avoid life itself. Therefore it is better to be defeated than not to know defeat – one must taste this before one can appreciate victory.”

Fellow Olympic medalist Tom Wilkens said, “All of the ribbons, medals and awards are secondary to the places I’ve been, the experiences I’ve had, and most of all, the friends I’ve made because of swimming.”

Words from Olympic pool swimming champions that are entirely applicable to those who have struggled through the elements of the open water world.