Sarah Thomas Does It Over And Over Again 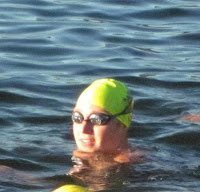 There are few in the open water swimming world who elicit the global praise and deeply felt respect and admiration like American marathon swimmer Sarah Thomas.

The Colorado native embodies the mantra of fellow open water swimming enthusiast Bob Roper, “Anything worth doing is worth overdoing.”

As the channel swimmer considered the number of channels and lakes worldwide to swim across, she selected two in the native America that had never been consecutively crossed from end to end without a wetsuit.

High up in the Sierra Nevada mountains bordering California and Nevada, Thomas’ first record-setting swim was in Lake Tahoe where she swam 42 miles in 22 hours 15 minutes. Her second record-setting marathon was in Lake Memphremagog where she swam 50 miles in 30 hours 1 minute. Both swims proved that Thomas was one-of-a-kind as she negative split – coming back on her second leg faster than her first even as conditions were never ideal.

For her two record swim, Thomas was nominated for the 2013 World Open Water Swimming Woman of the Year. Her nomination reads, “Back and forth, up and way, two-way, and double-crossing. If it involved doing anything in the water twice, Sarah Thomas is on her game. Her two swims in 2013, both the double-crossing of Lake Tahoe and the double-crossing of Lake Memphremagog, were unprecedented. Both unprecedented swims elevated her to the elusive 24-Hour Club status, finishing 42 miles in Lake Tahoe in 22 hours 15 minutes and 50 miles in Lake Memphremagog in 30 hours 1 minute. Proving her mettle despite unkind conditions, she negative split both marathon swims. For her willingness to extend herself beyond what others do, for her courage to retrace her strokes in lakes throughout North America, for her two unprecedented two-way crossings, Sarah Thomas is a worthy nominee for the 2013 World Open Water Swimming Woman of the Year.”

Along with Thomas, the 2013 World Open Water Swimming Woman of the Year nominees include:

Thomas’ two-way swims are always interesting as she seems to really pick up the pace coming home. Her Lake Memphremagog’s double-crossing was no different, although Thomas is always the first to make no guarantees. Prior to her swim, she commented, “I have no plan [to negative-split the two-way swim], but if the wind gives me a push on the way back, it’s possible. I’m feeling pretty lucky to have Phil’s support, and that of all the people he has rallied together. The swimming community is pretty amazing.”