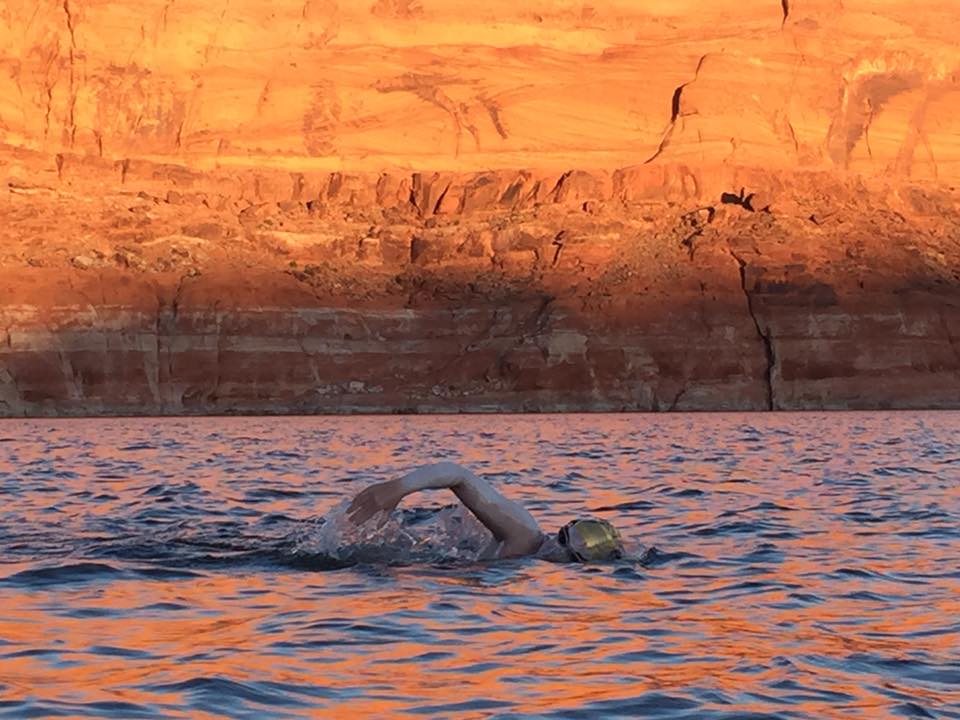 One of the most remarkable marathon swims in history was virtually followed by tens of thousands of people earlier this month. Sarah Thomas not only selected one of the most picturesque venues possible for her 81.8-mile (131.6 km) solo, non-stop swim, but she recruited a top-notch team of volunteers to assist in her 56 hour 5 minute effort in Lake Powell along the Arizona-Utah border in the western United States.

34-year-old Thomas talks about her swim, her mindset, her meals, and her sleep patterns before the swim:

Daily News of Open Water Swimming: What did you do 24 hours before the start of your swim?

Sarah Thomas: On Sunday morning, I swam about 2,500 meters before we left to drive to Lake Powell. We drove about five hours and stayed at a hotel in Blanding, outside of Moab [in eastern Utah]. We woke up on Monday, got groceries, and drove the final two hours to the swim start. We checked into the houseboat at 3 pm and my crew started to load supplies. My mom took me to the hotel where I napped and laid in bed from about 4:30-7:30 pm. We had a team dinner at 7:30 pm on Monday night. I was back in my hotel room at 9:30 pm. The swim started at 8:30 pm on Tuesday.

Daily News of Open Water Swimming: How many hours of sleep do you have on your last sleep before the start of your swim?

Sarah Thomas: I tried to sleep from 10 pm to 7:00 am. Possible actual hours? Around six? There was a lot of tossing and turning and I was awake well before 7:00 am, although I stayed in bed.

Daily News of Open Water Swimming: What were your last three meals consumed before your start? 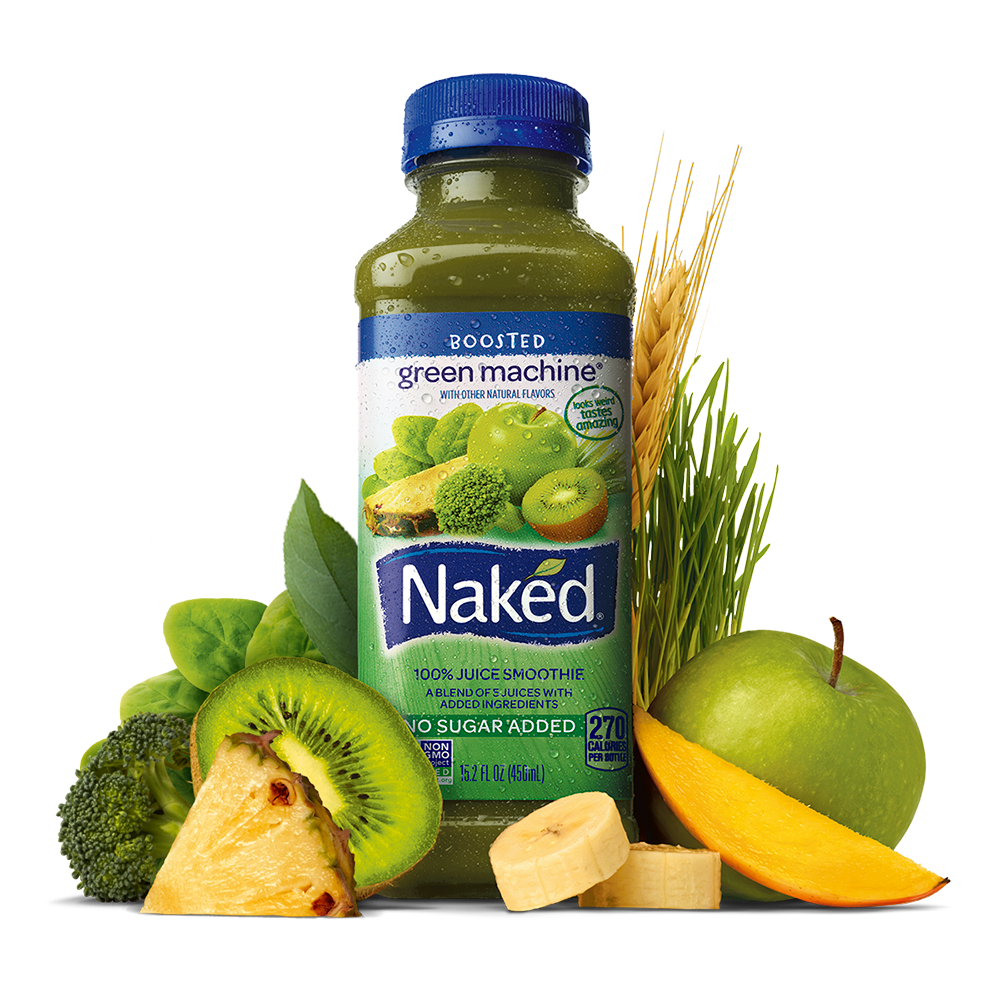 Sarah Thomas: Because we were travelling, it was tough. I did not get a solid breakfast at the hotel on Monday morning. I ate a peanut butter and honey sandwich and had a Kind Bar. We had a hamburger and fries for lunch that day. And the meal at the team dinner was some type of southwest chicken dish, if I recall. We had birthday cake for [husband] Ryan [Willis], too.

The morning of the swim, I had a Kind Bar and a Green Machine Naked Juice, about 30 minutes before swimming.


Daily News of Open Water Swimming: What things went wrong or off-plan in the 24 hours before the start?

Sarah Thomas: We couldn’t load the boat until 5 pm, not 3 pm like I thought, so there was a delay in my crew getting things loaded. Luckily, that didn’t impact me. Also, there was really strong wind on Monday and I had a group of five travelling up the lake from the finish to the start. They barely made the team meeting. Also, not getting a solid breakfast on Monday morning wasn’t in the plan.

Daily News of Open Water Swimming: How much of the logistics and operations did you leave to your husband or others?

Sarah Thomas: I was involved with all of the planning that went into this. I knew who was bringing spot lights, radios, maps, etc. I knew where everyone was travelling from and their ETA to Bullfrog, the start. I knew where we planned to get gas during the swim, how all of the boats worked, etc.

Karl Kingery and Jamie Patrick spent the most time on the GPS route, but I was reviewing and making suggestions on that as well. When we had questions about route, we involved the observers [Andrew Malinak and Suzie Dods] and Evan Morrison to help aid in our discussion about specific route/waypoints.

I’ve spent hours on Google Earth looking at the route. A few times during the swim, I was able to tell my small support craft where we were in the lake from memory; they didn’t have a map, which was on the large houseboat. My husband and I did a dry run of about 30 miles on a boat back in May, so I was very familiar with the first 30 miles of the route. I assigned meals to people for Tuesday, Wednesday, Thursday and Friday and made the meal schedule and purchased all the groceries. We had non-pork eaters and a vegetarian and someone with a shellfish allergy. Pretty much had my hand in every piece of this swim.

Daily News of Open Water Swimming: What were the contingency plans in case of emergency or hospitalization? 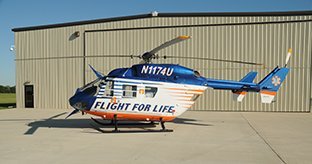 Sarah Thomas: My cousin, Alex Thomas, was on board. He is a paramedic. We confirmed with the marina back in May that we would have radio coverage throughout the lake and that we could call Flight for Life if needed.

One of the reasons we rented the 19 foot speedboat was so that we could get to Bullfrog or Wahweap within a couple of hours should I need to be rushed somewhere.


Daily News of Open Water Swimming: Who have the final authority for stopping the swim?

Sarah Thomas: My husband, Ryan. I was very explicit in that I did not want to be pulled without Ryan or my cousin Alex, the paramedic, right there.

Daily News of Open Water Swimming: How did you go about recruiting such a large team, both onshore and on your escort boats/kayaks?

Sarah Thomas: I’m lucky that I have a very involved family and swim community here in Denver. We had 13 people on the crew: my mom, her boyfriend, my sister, my husband and my cousin. Three others are people that I regularly train with here and who have crewed for me in the past, plus one girlfriend who assisted on my Ice Mile last year and regularly socializes with us. Scott Olson, I met at END WET 2 years ago and he’s kayaked for me for 3 END WETs and on my Flathead Lake crossing. He’s hands-down the best swim escort kayaker I have ever met and when I was planning this, I knew I needed him. He’s up for adventure, so he was easy to talk into this.

Jamie Patrick and I have been friends since he crewed my double-crossing of Lake Tahoe in 2013. He’s very familiar with Lake Powell and had done some research for a swim of his own, so I needed his support and knowledge. Everyone was so willing to help – and it turns out I needed every single one of them at some point on this swim to help get me through.


Daily News of Open Water Swimming: Was this all paid for by yourself or did your crew volunteer to pay their own way to support your swim?

Sarah Thomas: I paid for all of the boat rentals, groceries and gas. I bought my cousin’s plane ticket, since he was coming as our paramedic. Everyone else purchased their own plane tickets and travel to/from the start.

Daily News of Open Water Swimming: Did you have to submit permits or ask for permission from any government authorities (local, state, regional or federal) to do your swim?

Sarah Thomas: We did not. When we scouted in May, we asked the boat rental folks about any boating, kayaking, or swimming restrictions throughout the lake. There were none.

For additional articles on Thomas’ swim, read the following: