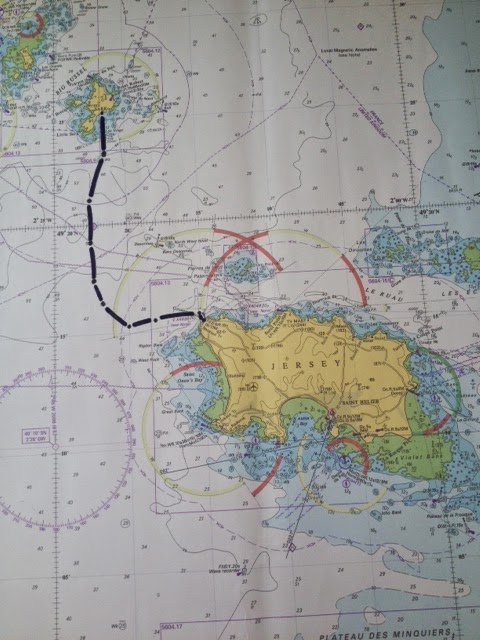 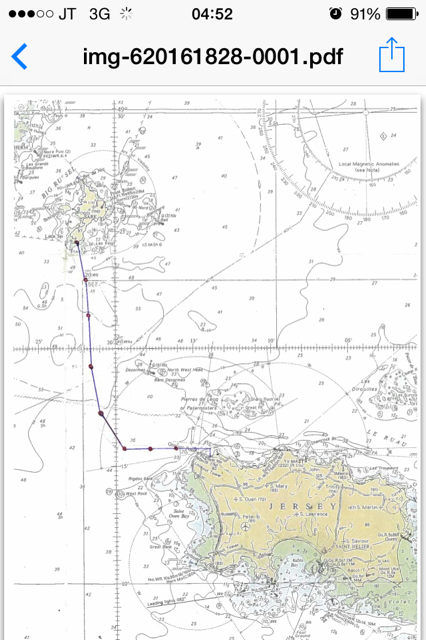 Sally Minty-Gravett successfully completed her Sark to Jersey crossing in 8 hours 42 minutes after her first attempt failed 7 years ago.

The 12-mile (19 km) British Channel Islands crossing, which took a different route than that of pioneer Neil Faudemer, was a tough one. “The swim charts were almost identical (Minty-Gravett’s is on the left and Faudemer’s chart is below). It took me almost an hour to swim from where I started Dixcart Bay to where Neil started on the west side of little Sark.”

The 51-year-old Faudemer swam from Sark to Jersey in July 2011 in 8 hours 9 minutes despite encountering a shark and jellyfish.

Minty-Gravett became the first woman to complete this crossing on June 22nd. She started on a different part of Sark and told BBC.

“I’d always thought it’d be good to do because nobody had ever done it [from that point]. Neil Faudemer did it three years ago [starting] from a different part of Sark.”

Similar to the islands in Hawaii, the Santa Barbara Channel and between the California mainland and the Farallon Islands, there are possibilities of different routes between Sark and Jersey. Charlie Gravett spent many hours putting the navigation together on various charts. “Both British Admiralty and French charts as the tidal flows and currents are quite tricky.”

The experienced navigator from Jersey explains the differences. “Sark comprises two distinct land masses joined by a very thin, short isthmus. Both Neil and Sally had previously attempted to swim from Dixcart Bay to Jersey’s north west coast. Initially they were both snookered by strong tides in Neil’s case and my ineptitude in Sally’s when I short-circuited the GPS system. We had tried with Sally some seven years ago and Neil aborted attempt was probably three years ago. We had both reach a similar point when the swims were aborted.”

But on June 22nd, Gravett was constantly readjusting his wife’s course at regular intervals as the tide took them west of her expected course. “Neil’s successful swim began on the most southerly point of Little Sark close to Venus Pool, one point four nautical miles south of Sally’s start point on the beach of Dixcart Bay which was chosen for its lack of rocks and underwater obstructions, which I couldn’t be sure of elsewhere.”

Both Faudemer and Minty-Gravett landed fairly close to one another on Jersey. “We landed below the ancient castle ruins at Grosnez, just below the navigation light Neil finished at Plemont Point, perhaps a mile to our east. So both swims covered the approximate same distance.”

Sally Minty-Gravett and Neil Faudemer swam the same distance, between the same islands, pushed by the same pioneering spirit while undaunted by previous failed attempts. “Those were 12 hard miles,” summed by Minty-Gravett afterwards.