Say It Ain’t So, Rick Walker 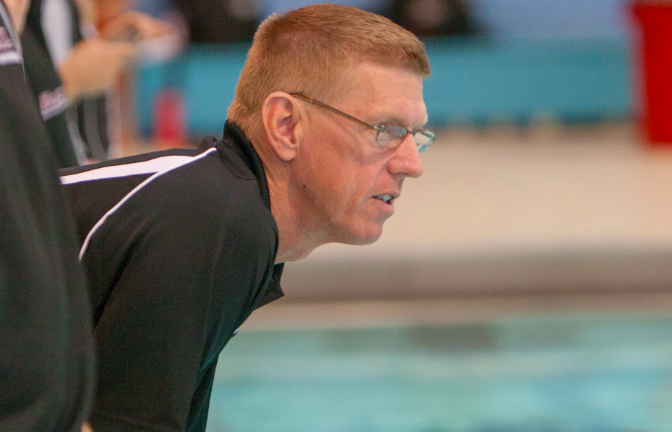 “No tears (well some), no regrets,” wrote Rick Walker who coached at Southern Illinois University for 32 years in addition to leading dozens of USA national teams at international open water swimming competitions.

“I wish to thank all the athletes who chose to follow and at some point lead. If I have done well, it was on their backs that I was carried.

If I didn’t fair so well, it was because I failed in direction. Above all, I want to thank my family. It is from my inner most depth that I wanted to just make them proud of the man I was/am. SIU has provided me with the opportunity to coach. They guided – but never squelched – the potential that was within me. Who could ask for anything more. I’m a Saluki and damn proud! Go Dawgs!
“

“Rick has done an outstanding job during his long tenure here at the University,” said Director of Athletics Jerry Kill. “He’s produced great swimmers, great student-athletes, his athletes have always been involved in the community and at the ballgames, and have been a reflection of him and his love for the University. We’re very appreciative of the time and efforts he’s put in and wish him nothing but luck down the road.”

Walker coached 8 swimmers who have went on to compete at the Summer Olympics including Mazen Aziz of Egypt and Csaba Gercsak of Hungary in the Olympic 10K Marathon Swim at the 2012 London Olympic Games. He served as the head coach for USA Swimming’s national open water team for 12 years and the head coach for USA Swimming’s development camp for 15 years.

“Rick has been a real champion of the sport – both by leading teams and quietly and diligently behind the scenes,” recalls Steven Munatones. “He always put his athletes first. I remember back in 2010 when he won the Adolph Kiefer Safety Commendation award at the annual United States Aquatic Sports convention in Dallas, Texas.

He literally saved Kate Brookes-Peterson‘s life during the 25 km race at the 2009 FINA World Championships in Ostia Beach, Rome.

Walker typically downplayed his actions. “It is with great humility and somewhat awkward feeling that I accept this award. Humility, because I did not think of my actions as heroic. I saw the danger unfolding, it happened, I dealt with it, and continued with the rest of my duties of the race [as a FINA official]. It is awkward for me because there are so many coaches and officials who have responded to tragedies and more important have prevented them from occurring in the first place. I cannot put into words how honored I am to be recognized among those who want to provide fair play and a safe environment for our swimmers. It’s about the athlete, it always has been.”

At the time, Walker was serving as a referee in the women’s 25 km race. He knew all the athletes, the conditions they were facing, and the rules of competition like few others, but Walker also knew that something was up when he saw two-time world championship medalist Kate Brookes-Peterson of Australia uncharacteristically struggling. He just knew something might be up. “I wanted to be in a position to help if anything went wrong. The conditions were rough and we had a situation,” he recalled.

He directed his official referee’s boat towards the back of the lead pack. “I saw Kate go through the feeding pontoon and she didn’t look good. She was struggling. Because she was normally a strong swimmer, I knew something was not right. I then informed the head referee that I was going to look after Kate.

When I was heading over to her [in the official’s boat], she stopped, went vertical and raised her hand. Then, she went under. I was watching her position as we were moving towards her. When she came back up, she was gasping for air. She waved her hand, went limp and went under again.

When we got to her, her hand was up [towards the surface of the water], but underwater. I was able to reach down and grab her [underwater] and pull her up. I don’t think she was going to come back up. She gasped for air [as she surfaced] and we finally got her into the boat as she passed out. She was about for about 30 seconds.

It’s a good thing we got to her before she took in too much water and drowned. We were thankful to get her out of the water and out of danger.

“It was Walker’s foresight, his understanding of the athletes, and his knowledge of the potential dangers of open water swimming that saved Brookes-Peterson in 2009,” Munatones said. “He is a hero for sure. And a humble one at that. The sport has been much better served by having an individual like Rick involved as a coach, administrator, team leader, official and referee.”