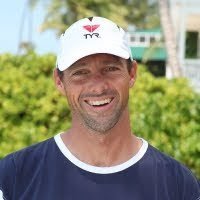 Four-time USA Swimming national open water swimmer John Flanagan who just missed out on a medal at the 2001 World Swimming Championships 10K continues to make news in his new sport – triathlon where he is known as the King of Swim.

John used TYR’s Sayonara Shortjohn Swimskin to great fanfare at the Hawaiian Ironman this year when he head off fellow TYR spokesman Andy Potts 47:42 to 47:45, over 2 minutes faster than the third-fastest swimmer.

“TYR is committed to the success of its athletes and I want to continue to be a part of it. I use TYR products everyday for either training or racing,” explained John about his decision to sign with TYR.

John will be one of the keynote speakers at the Global Open Water Swimming Symposium & Conference to be held in Long Beach, California on June 5th where he will talk about how open water swimmers can make a successful transition to the sport of triathlon.