Scarred For Life On A Starry, Starry Night In Arizona 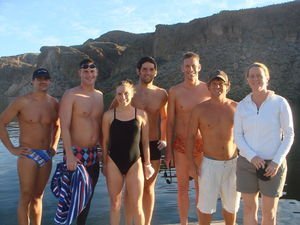 It was a night none of the swimmers will ever forget.

Patrick Brundage recalls, “I could swing my eyes upward a bit and see the brilliant starry sky that we never get to see in light-polluted Phoenix. It was gorgeous. Add to that the neat effect of my orange glow stick wrist band and one of my pink glow sticks that was on a longer string flopping around and this was the closest I think I’ll ever come to a swimming rave. I didn’t even need club music to get totally lost in the zone of swimming. I was really digging [swimming in Roosevelt].”

But the daytime swims of the four-day, 66.9 km (41.7-mile) stage swim organized by Kent Nicholas were similarly unforgettable.

David Barra summed up the first reservoir swum, “The banks of the river and Saguaro Lake are lined with sage and saguaro cacti that alternate between open areas and tall canyon walls rising straight out of the water. The rugged beauty of this lake is breathtaking, and I was, at times, distracted, wanting to focus my attention on one feature or another.”

Janet Harris was also impressed by the second reservoir swum, “Canyon Lake lived up to its name. The walls rose up dramatically on both sides of the lake all along the twisty route from dam to dam. We even saw a big-horn sheep along the way.”

The brainchild of deep-thinker and criminal attorney Kent Nicholas was beautiful, but it was definitely not easy. He felt the effects after his 8 hour 25 minute swim against the oncoming wind for 27.3 km in third stage in Apache Lake, “Well that was a son of a b***h!”

Nicholas hosted the inaugural S.C.A.R. Swim Challenge in 4 reservoirs in Arizona as a means to prepare for his 2012 Manhattan Island Marathon Swim. His underground stage swim was so successful, he is now attracting swimmers from as far away geographically as Ireland. Ned Denison, always up for any challenge on any continent, will take a bit of a detour on his way from Cork, Ireland to Fort Lauderdale, Florida in order to participate in the S.C.A.R. Swim Challenge.

The S.C.A.R. Swim Challenge stands for 9.5-mile (15.2 km) Saguaro (Lake), 9-mile (14.4 km) Canyon (Lake), 17-mile (27.3 km) Apache (Lake), and 6.2-mile (10 km) Roosevelt (Lake). “In search of a unique open water swim challenge in Arizona, the four reservoirs on the Salt River provide that unique opportunity,” explains Nicholas. “It’s a bit of a rogue swim because there were no permits, licenses, insurance, coast guard support, law enforcement approval, or any other permission sought from anyone. We hiked, boated, swam, laughed and swam again without letting the obstacles and hurdles of modern life prevent us from swimming more than 40 miles in a beautiful environment.”

The Saguaro Lake stage is a 9.5-mile (15.2 km) swim at 1529-feet (466m) elevation which is rimmed with canyon walls. The lake is home to all kinds of fish including carp weighing as much as 30 pounds. The venue is within the Superstition Wilderness of the Tonto National Forest. The Canyon Lake 9-mile (14.4 km) stage is done at 1,660 feet (505m) altitude, formed by the Mormon Flat Dam. The Apache Lake is a 17-mile (27.3 km) stage in the beautifully isolated Apache Lake. The lake separates the Four Peaks Wilderness from the Superstition Wilderness and is considered fairly remote (dirt road access). The picturesque canyon is framed by the Mazatzal Mountains and Superstition Mountains. The Roosevelt Lake stage is a 10 km night swim that begins at a very small boat dock approximately 5 miles east of the marina and finishes under the stars and moon at the Roosevelt Dam.