Scenes From Above And Tragedy Below 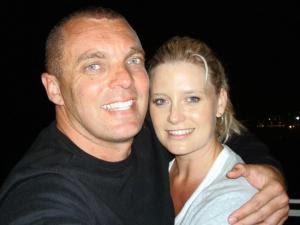 For the second time in its history, a swimmer was feared dead after failing to complete this weekend’s aQuellé Midmar Mile.

In 2011, 45-year-old Nico Mellet died in the first fatality during the Midmar Mile, the worlds largest competitive open water swim.

16,996 individuals entered the 41st edition this past weekend, but 43-year-old Herman “Thabo” van Straten of Johannesburg, South Africa has not been found 2 days after his swim on Saturday reported Neville Smith who has been following the developments.

Like with Mellet, Lieutenant Jack Haskins of the Pietermaritzburg K9 Search and Rescue Unit was tasked with finding Van Straten’s body. He said he had been with his family and friends since Saturday.

Inspector Haskins, a long-time K9 Search and Rescue officer with the South African Police Service, has played a major role for many years in implementing the safety protocols and procedures behind the scenes at the Midmar Mile together with Wayne Riddin. He and his dogs (Udaine, a Belgian Shepherd, and Butch, a black Labrador cross pointer) are trusted with maintaining a lookout for individuals who are in distress. “[In 2012] we added pontoons along the course so we can have lookouts for swimmers as well as a place for people to rest if they are tired or feel anxious,” said Riddin.

“When a person starts to drown, their body shuts down and decomposition begins almost immediately,” explains Inspector Haskins. “Fluids from their body float to the surface of the water.” It is these fluids that his dogs recognize to help locate bodies in his line of work with the South African Police Service.

Fiancée Shené Jones (shown above) had been waiting for Van Straten at the finish on Saturday in a course that was surrounded by 130 lifeguards on paddle boards and official boats, but a search party continues from daybreak to sunset. The South African National Open Water Swimming Championships continued in the Midmar Dam after the Midmar Mile event was over. The 5 km event course was changed so as to not interrupt the search efforts.

Copyright © 2014 of aerial HD video of the aQuellé Midmar Mile by RC HELICAM with a quadcopter.