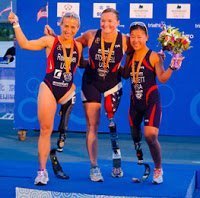 The endurance sports community will come to Los Angeles, California on March 10th for Endurance LIVE. Organized by the Competitor Group, Endurance LIVE Awards Ceremony was previously known as the Endurance Sports Awards that honor the best among endurance runners, cyclists, mountain bikers and triathletes.

Scout is a triathlete whose smile and outlook in life quite simply melts hearts. The China-born athlete was left on the door of an orphanage with a missing lower right leg, burns and scars on other parts of her body. She was given an artificial leg of sorts. “It was made of belt straps and masking tape. It clanked and fell off.”

As a child, she was often put to work feeding babies and scrubbing floors. But she was finally adopted and raised to realize her dreams. But athletic success in Michigan did not come soon or easy as she first tried basketball, soccer, and softball. “It was an incredibly awkward time in my life. I sat on the bench a lot. My softball coach didn’t let me play at all, ever. I didn’t realize the stigma that’s attached to being disabled until then. I still remember that to this day. It had a huge effect on me.”

She was honored by Endurance LIVE as a world-class triathlete who won silver at the Paratriathlon Nationals in New York City and a bronze medal at the International Triathalon Union Paratriathlon World Championships in China.