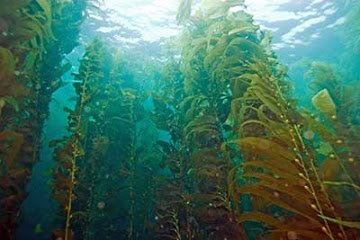 Swimming in Cabrillo Beach near the traditional finish area of Catalina Channel crossings, we found ourselves swimming parallel to rocky coastline of Southern California among a thick kelp forest.

The thick kelp forest below the water surface seemed to stretch forever beneath the water’s surface. Although we wondered what possibly could be down among the kelp, we had no real worries or high expectations that we were going to run into anything out of the ordinary. 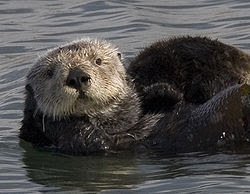 But out of the blue, a solitary sea otter popped up to the surface with its cute little head. We immediately stopped right there and just stared. The little furry pup startled us and it stared back right back at us with its long whiskers twitching inquisitively. We didn’t know if he would bark or bite so we just eggbeatered in place.

Our marine friend did the same. The stare-down must have been only seconds long, but it seemed longer. Its eyes gazed into ours. We didn’t dare blink or move, not knowing what it would do. It sniffled its nose as if to indicate our human smell was odoriferous.

Then suddenly, as soon as the