Sea Sprints In The Open Water 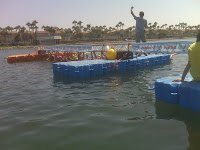 The athletes will start in the middle of Marine Stadium, against the feeding pontoons (partly shown in the photo above) and sprint a little over 75 meters to shore. The Sea Sprints will cater not necessarily to the middle-distance or long-distance freestyler, generally considred the typical open water swimmers, but to sprinters who use different energy systems to race.

Just like the 50-meter race in a pool is often the most exciting race at the Olympics with adrenaline flowing and tension in the air, the give-it-all-you-have Sea Sprints will end in exciting finishes and will culminate an adrenaline-filled weekend of traditional and new open water swimming races in Marine Stadium.