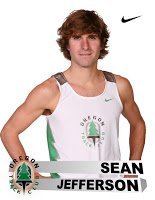 Sean Jefferson is a professional triathlete who was previously a 3:56 miler and 6-time NCAA All-American runner.

He has the aerobic base and talent on terra firma to be competitive on the bike and mow his rivals down on the run, but he needed to swim faster – much faster – before he became a competitive professional in triathlons.

He moved to Los Angeles and started working with Coach Gerry Rodrigues of Tower 26. Coach Rodrigues knows that many of his amateur and pro triathletes enter cycling and running events in the course of the year to measure their performance and judge their level of fitness.

But he also knows that the same was not true for the swimming portion of the triathlon. So he set up a swim meet in the Tower 26 home pool and Jefferson – and others unlikely to enter a swim meet – went at it.

As his coach says, “He’s motivated even more now [to go faster].”