The Search For Nick Mellet Continues 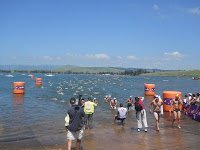 There was no precedent or handbook on what the aQuellé Midmar Mile race director Wayne Ridden faced at this year’s race. Days before the 38th annual swim, he was confirming details and coordinating an experienced army of hundreds of staff and volunteers on everything from late entries and protocols surrounding the participation of the future royal princess Charlene Wittstock. But his greatest concern was always safety.

“We had a heart attack victim a few year ago, but I have always feared someone going down,” said Wayne a few days before this year’s event.

It was a worse-case scenario that Wayne had feared – and faced when 45-year-old Nick Mellet apparently collapsed and went down unseen during his mile heat in the over-30 age-group. Despite the presence of the South African Navy under the command of an experienced Rear Admiral and 8 divers positioned under the water, Nick went unnoticed somewhere around the 800-1200 meter mark in the straight-line 1600-meter course in the relatively flat conditions under slightly windy conditions and bright sunny skies. With hundreds of swimmers around him and thousands of people onshore, nothing was seen or reported until after Nick was expected to finish.

Jack Haskins of the Pietermaritzburg Dog Unit told the local press, “The problem is that no one saw anything or reported seeing a man struggling during the race. And the dam is very big and the water levels are high so it is very challenging for us to locate the whereabouts of the body.”

Neither the 120 lifeguards positioned approximately 50 meters apart on either side of the course nor the dozens of safety or official or media boats saw Nick raise his hands or go under. Once alerted to the situation, Wayne and the safety officials immediately implemented their safety protocols and met with the family after Nick’s transponder was not identified as crossing the finish line.

“Nick was fit. He did the seeding event (for the Midmar Mile) only a few weeks ago,” said press liaison Neville Smith. “Jack Haskins and his dog were on the course, but he couldn’t pick up a scent because of the wind.” Jack and his dog who have been sent by the South African government on numerous humanitarian and disaster missions around the world continued to search for Nick on Saturday under it was too dark to continue.

Before the race, the athletes are given clear instructions what to do in case of an emergency or if they have any fears. “When we had the swimmer have a heart attack a few years ago, we got him out of the water and in an ambulance quickly. His family knew he received good medical care,” recalled Wayne.

Divers scoured the venue using their ample resources throughout the day and into the evening as Nick’s parents and fiancee feared the worse. Wayne and the safety staff who had never experienced anything like this in the previous 37 races, worked with the local police Search and Rescue Unit, Army personnel, Navy divers, Ezemvelo KZN Wildlife staff strategizing and continuing the search. The next morning, an airplane was brought in to do flyovers over the still morning waters. Nick was wearing a yellow cap so the hope was to find him in the relatively clear waters. “But some places in the dam are up to 30 meters deep,” explained Neville when the search failed to come up with anything on the second day.

“Early the next day (on Sunday), we continued the search,” said Wayne who was visibly shaken as he continued to direct the world’s largest open water race. “We only started Sunday’s heats after receiving the permission from his family. The overall mood of the event was depressing. The event would obviously not have taken place if we knew what would have happened.”

Thousands of swimmers and spectators waited onshore in respect of the situation and the family. Even with a helicopter overhead and ample resources searching every part of the course and under the water in boats and paddle boards, nothing was found throughout the day and evening, not even hints of his whereabouts.

On Monday morning with no wind at all, the dam was glassy flat for the 3K race that culminated the aQuelle Midmar Mile. Army, Navy and police divers again came up empty as they searched the dam bottom and waters around the venue. Experts say that decomposition begins to occur and gasses released inside the human body causes it to float with a few hours to a few days depending on a variety of circumstances. The water at the bottom may be sufficiently cold to prevent decomposition gasses from floating the body or puncture wounds may release trapped gasses.

For the third straight day, his family was shaken but not close to giving up hope to find Nick. Rok Kerin of Slovenia who also swam at the FINA 10K Marathon Swimming World Cup in the United Arab Emirates in 2010 when Fran Crippen died said, “I can’t believe this happened again. What happened? What can be done?” It was a question that weighed heavily on everyone’s mind. With 16,500 swimmers entering the water in different heats with safety personnel below, on and above the water, no one had the answer. The search continues for Nick for the fourth day.

“We review everything in detail after the race is over and go over the entire race and our safety protocols,” commented Neville.

Postscript: Nick Mellet’s body surfaced at mid-day on Wednesday, four days after the tragedy, and was recovered by the South Africa Police Service with Jack Haskins at the investigating officer.