This week during her swing through Asia in a number of public announcements, speeches and diplomatic discussions, Secretary of State Hillary Clinton urged the governments of the area to up its diplomacy and downplay its aggressions.

With all kinds of simmering debates and conflicts over territories, rock outcroppings and islands, the former United States Senator urged caution over repeated divisions among the countries of Asia.

With swimmers and politicians making highly-visible symbolic swims while putting controversial stakes in the ground, the former First Lady is seemingly putting the weight of her office and position between different geographic clashes throughout Asia, including the historic problems between Japan and Korea.

When South Korean President Lee Myung-Bak visited the volcanic islands in the Sea of Japan (East Sea), political tensions between Korea and Japan skyrocketed as one example. As a result, Japan recalled its ambassador from Seoul while the Japanese Prime Minister Yoshihiko Noda described the visit as extremely deplorable. 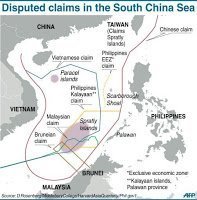 In the middle of this ongoing diplomatic row and territorial dispute, a team of South Korean swimmers jumped into the fracas by announcing its plans to swim 144 miles from Uljin, Korea to Dokdo (the Korean name). So as Clinton wishes peace, the swimmers are attempting to stir up attention in an attempt to assert Korean sovereignty over Takeshima Island (the Japanese name) that is claimed by Japan.

The outcroppings are a group of small islets in the Sea of Japan. Sovereignty over the 2 main islets and 35 smaller rocks has been long disputed between Japan and South Korea. The islets lie in rich fishing grounds which could also contain large gas deposits.

In a swim teaming with overt political overtones and known by politicians and diplomats throughout the region, the Korean swimmers plan to complete the swim on Liberation Day Wednesday, which marks the ending in 1945 of Japan’s 35-year colonial rule over Korea.

Team captain Kim Jang-Hoon, joined by members of a swimming club at the Korea National Sport University, estimates the swim will take 55 hours. In words that rile the Japanese government, Kim said, “I will never make such a comment as ‘Dokdo is our territory’ when I arrive there. It’s meaningless to do so because they are undeniably our territory.”