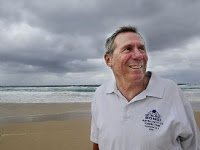 When Des Renford first swam the English Channel in 1970, he was 43 years old and was referred to in the press as “Maroubra Grandfather Des Renford” because back in the 1970s swimming community, 43 was considered quite advanced in chronological age.

But as Renford’s articles remained tucked away and became yellowed over time, perspective on age has been transformed.

By the time Renford retired from swimming the English Channel in 1980, he was 53 years old the retired as the King of the Channel title with 3 crossings in 13 days and a total of 19 successful crossings out of 19 attempts. He went from Maroubra Grandfather Des Renford to “Marathon Swimmer Des Renford” in the press.

Michael Renford remembers his father, “Dad paved the way for the next generation of Australian marathon swimmers by giving our sport legitimacy and a profile. And his rivalry with the great Englishmen Kevin Murphy and Mike Read became the stuff of legends.”

But 53 is almost childish compared to what some swimmers like Dr. Otto Thaning, Dr. Roger Allsopp and Cyril Baldock [shown above] are doing in their 70s as they train and eventually cross the English Channel one more time as septuagenarians. So inspirational these septuagenarians and their younger Baby Boomer colleagues, especially the very active 50ish up-and-coming female swimmers of note.