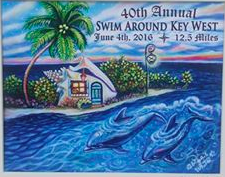 185 swimmers from 7 countries and 29 American states will compete in the 40th Annual Swim Around Key West this Saturday beginning on Smathers Beach. Participants in the 12.5-mile endurance event will swim the circumference of the island individually or in teams of two or three.

Welzein describes his expectations, “The majority of solo swimmers will complete the distance in 5-6 hours, but participants have as long as 8 hours before the course closes. In addition to the solo event, 13 two-person relay teams and 20 three-person relays are entered in the race. Relay teams generally charter a motor boat to transport team members between entry points. There are no land entries for swimmers. Two-person relay members will each swim 6 miles continuously and three-person team members will swim 4 miles each.”

16 international competitors are from Switzerland, Germany, Guatemala, Mexico, Canada, Costa Rica and the United Kingdom. 29 states will be represented including Oregon, Alaska, Montana, Ohio and Maryland. The state of Florida is well-represented with swimmers from 49 different cities.

“The historic, round-the-island event is the longest-running sporting event in the Florida Keys. It was founded in 1977 by Anna Fugina who began swimming as therapy to assist recovery from a car accident. She completed the first swim in 12 hours 59 minutes, improving to 8 hours the following year with careful consideration of tides. The current record finishing time is 3:31:28 set by Gabe Lindsey in 1999.”

Fugina remains an active part of the event and the 64-year-old will swim in the two-person relay this year with her daughter Maria Pennella.

“The event starts and finishes at the west end of Smathers Beach on the Atlantic side of Key West. The first wave of swimmers will take off at 6:30 am with the official start at 7 am. Slower swimmers can take the extra half hour to assure favorable tides through Key West Harbor, Fleming Cut and Cow Key Channel.