Setting History By Swimming Down The California Coast 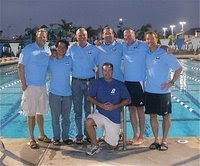 The world record for the longest continuous marathon swims is under assault again.

After a team of Floridians under the leadership of Dr. Lucky Lucky Meisenheimer set the world record in Lake Cane in 2008, two international teams in Lake Taupo, New Zealand in 2009 re-set the bar with the help of three-way English Channel swimmer Philip Rush.

But at least three different teams of North Americans are itching to get back the record.

With the Night Train Swimmers taking their shot in the warm, flat waters of Lake Powell, Arizona later this month and another team preparing under stealth conditions, the Ventura Deep Six Relay Team is taking a more difficult route to the world record – a non-wetsuit relay swim down the California coast.

The Ventura Deep Six Relay Team will attempt make its own statement starting on September 16th at 6:00 am with an audacious goal.

But with detailed logistical planning and a steely commitment by Mike Shaffer, Jim McConica, Kurt Baron, Tom Ball, John Chung and Jim Neitz, a hardy bunch of experienced swimmers, the group from Ventura, California will swim around the clock during their 202-mile (325K) non-stop continuous open water world record attempt. The team is predicting a finish sometime during the daylight hours in San Diego on September 19th – over 3-days of constant swimming in the rough and cold California coastal waters.

They will be guided by a mother ship, the Pacific Monarch, another separate escort boat, two Zodiacs and multiple kayaks manned by an around-the-clock 12-person boat crew, three observers and four additional support crew rotating shifts throughout the 3-day world record attempt. The Pacific Monarch is a 135-foot US Coast Guard certified small cruise ship with 27 cabins that accommodates 52 guests on overnight voyages.

The team has prepared themselves mentally and physically with an all-for-one and one-for-all approach, protected by their Pacific Monarch flotilla. Along the coast, each man will face ocean temperatures have been at a historic low throughout this year (yesterday, the water temperature generally averaged between 59°F (15°C) and 64°F (17.8°C) along their course), more than a few degrees colder than normal.

The entire crew and team of swimmers will stay onboard the entire time. Following standard English Channel and Catalina Channel rules, the six swimmers will use the same rotation throughout the entire relay, switching swimmers every hour without stopping. If one swimmer gets sick or tired, the same rotation is required according to the rules. Even if the sick, tired or injured swimmer cannot progress much, they have to stay in the water for their required hour in order to adhere to the strict rules of the sport.

The Ventura Deep Six Relay Team are swimming as a fund-raiser charity event for their local swim team. Starting from Ventura Harbor, the swimmers will initially head north to the Santa Barbara Pier. After turning at the pier, the team will head south past Los Angeles, then Orange County and then head towards the final stretch to La Jolla Cove in San Diego where they plan to finish on Sunday afternoon.

They will be tracked by GPS throughout their entire swim with latitude and longitude markings reported every five minutes from the Pacific Monarch’s GPS.

However romantic the journey appears, it will be difficult. They will face massive blue whales, sharks, large swells, oncoming currents, stiff whitecaps throughout the afternoon hours and cold water temperatures over the course of three days. But if any six can break the existing record, these six men can.

Track them online, cheer them on and support their cause.