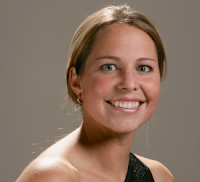 In an example of how international the global community of open water swimming is, American Catherine Vogt is the marathon swimming coach for Ous Mellouli, the Olympic gold medalist from Tunisia who also looking to qualify for the 10 km marathon swim in Setubal Bay, Portugal this weekend.

The blonde hair, blue-eyed Vogt has enjoyed a long career as a successful pool and open water swimming coach. She burst on the international scene while she coached Chip Peterson to a gold medal at the 2005 World Swimming Championships 10 km race and a silver in the 5 km. She later became the first woman to serve on an American men’s swimming team staff.

Vogt and Mellouli started strategizing about the open water at the University of Southern California where she assists Dave Salo at the Trojan Swim Club.

“He is such a hard worker and he knows what he wants,” said Vogt who also helps coach the USC men’s and women’s swim teams. “He was injured a bit a few years ago, but he recovered and is swimming so well now.”

Vogt is fine-tuning the first Olympic swimming gold medalist from Tunisia by sharing her insights of the elite world of open water swimming. “Everything is so strategic at the highest levels, but at the end of the day, it is also primarily about raw speed, incredible endurance and power. And Ous has all three.”

He also has a base of knowledge of the rough-and-tumble world of open water swimming through his participation at numerous RCP Tiburon Mile events in San Francisco Bay. Although he has never won the RCP Tiburon Mile, he has been able to handle the cold water of San Francisco Bay and understands the physicality of the sport and the importance of drafting and positioning. But, even when he has been out-of-shape (a relative term when one can swim 14:38 in the 1500m), he has stayed at the toes of the elite open water swimmers.

Feeding is one aspect that he has less experience than the others, but his performance in Cancun at a recent FINA 10km Marathon Swimming World Cup proved that he is a quick study.

As the world of geopolitics where bias can shade the opinions and feelings towards people of different cultures, backgrounds and religions, it is refreshing to see how a coach from North Carolina plays such a significant role in the Olympic dreams of a Tunisian swimmer.

Look for Vogt on the feeding pontoon in London with Mellouli undoubtedly in the lead pack.