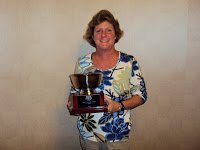 Personable Shannon Gillespy, a member of the USA Swimming Board of Directors from Texas, was awarded with the prestigious Glen S. Hummer Award at the annual United States Aquatic Sports Convention in Dallas, Texas tonight.

The accolades from the audience were very well-deserving.

Gillespy, well-known at the age-group and elite levels for her tireless efforts, optimism and passion for the sport of open water swimming, is a worthy recipient of the 2010 Hummer Award. For the last two years, Gillespy has gone over and beyond the duties of a team manager for the 2009 World Swimming Championship team, the 2010 USA Swimming National Open Water Select Camp and the 2011 World Open Water Swimming Championships.

“She does things that no one even imagines,” said team captain Fran Crippen. “She is up before everyone else and goes to bed after everyone else. She drives vans, washes – and folds – clothes for the team and does all the little things that make the athletes’ job so much easier.”

Gillespy’s smile is infectious and her willingness to lend a hand or ear, pick up a paddle or a bag and help pave the way for the athlete’s success is the model that all team managers seek.

T he Hummer Award was established in 1978, named for an Olympian and coach and is given annually to the person or group that makes the greatest contribution to open water swimming in the United States.

John Dussliere, the Olympic 10K Marathon Swim coach in Beijing, introduced Gillespy at the awards ceremony. “This award is given to the individual or group that makes the greatest contribution to the sport of open water swimming in the U.S. I can honestly say that this year’s recipient lives up to that of an individual doing the work of a group to see that our athletes had no concerns except preparing to race for medals.

Even now in an era where our team stays in the best hotels eating the best meals that we afford ourselves and our athletes, there are still a lot of things to worry about and deal with in preparing to race. Just as namesake Glen Hummer would go to any length to support his athletes, our recipient gave nearly eight weeks of her life in the past year by working as manager to our open water national team. She worked at the world championships last year in Rome, then at the national open water camp and the USA Swimming world trials in Long Beach this June and the world championship training camp and competitions in Montreal and Roberval where the athletes said that without her 24-hours-a-day tireless efforts enabled them to achieve the focus level required to have the success they had in 2010.”

Sacrifice with a smile. Purpose with a passion. Unselfish, cheerful contributions constantly. That is Shannon Gillespy.”