Sharp As A Swimmer, The Mervyn Marathon Magic 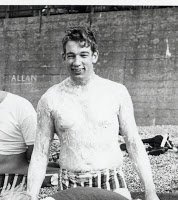 Sharp As A Swimmer, The Mervyn Marathon Magic

Mervyn Sharp of Great Britain was a 2006 inductee in the International Marathon Swimming Hall of Fame. Sharp was a former King of the Channel® with 7 crossings of the English Channel, done between 1967 and 1974.

This is his first-hand observation of his journey:

“I cannot remember all of our conversation, but I do remember explaining to [friend] Tom Watch that I had often read about English Channel swimmers, and maybe, just maybe, one day I would like to do the swim. But of course it was only a boyhood dream!

Tom told me in a joking kind of way, ‘Well Merv you look big enough and ugly enough, I cannot see why not, IF you are really serious.’

I remember cycling back home and then sitting down with my parents at the dinner table and I just said, ‘I have just be talking to Tom Watch and hopefully in the next year or two I may be swimming the English Channel.’

My parents just seemed to look at me as though I was on another planet.

Nevertheless, with a lot of dedicated training, I finally traveled to Dover for my first Channel swim which was in August 1967. So, if I had not cycled over to see an old school friend, I may never have become a Channel swimmer. I have to say that although both of my parents seemed to think I was on another planet at first, I really could not have asked for any more help from them. They were BOTH absolutely brilliant.

Although Tom introduced me into cross Channel swimming, it was my father Bill who trained me for most of my crossings and other marathon swims.

Just out of interest as part of my winter training I used to circuit train with the local amateur wrestling club where I went in for a couple of competitions in London and Manchester. But obviously swimming was always my first love and I competed in many open water swims around the United Kingdom on more than one occasion including 10 miles from Lulworth Cove to Weymouth, 20 miles from Weymouth to Lulworth Cove and back to Weymouth, 8 miles from Torquay to Brixham and back to Torquay, 5 miles in Exmouth, 8 miles in Lake Bala in Wales, approximately 30 miles from Swanage to Weymouth, 9 miles from Swanage to Bournemouth and many swims for charity.

In 1970, I was selected to represent England at Lake Windermere and during the summer of 1971 and 1972, I swam on the professional marathon swimming circuit in Canada competing at Lac St-Jean, Saguenay River, Chicoutimi to Bagotville and the 24-hour 24 Heures La Tuque.

In 1974, I was included in the Guinness Book Of Records by becoming the first person to complete 7 crossings of the English Channel. In 1996, I again entered into the Guinness Book Of Records due to the fact I was the First Person to Cross the English Channel in every way possible: swim in it, boat on it, aeroplane over it and train/Euro Tunnel under it.”