Shaving Down In The Open Water Swimming World – Part 2 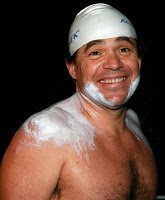 HUNTINGTON BEACH, California. One size definitely does not fit all in the open water swimming world. From training habits to feeding, open water swimmers follow an exceeding wide range of parameters.

And shaving down is no different.

FINA Technical Open Water Swimming Committee’s Sid Cassidy (shown on left in the blue shirt) believes in both sides of the shaving issue, “I believe shaving can be very valuable in certain situations: the fastest swimmers in the world shave for big events in no small part because it is psychologically comforting. If one believes it will help, it certainly will. I would be willing to bet that every American woman with a dream to swim in the 2012 London Olympics will shave [at the USA Swimming National Open Water Swimming Championships] in Ft. Myers.

I am fairly certain all the swimmers shaved at the 2008 Beijing Olympics marathon swim. But as for those of us in the “old days” of professional marathon swimming, I never shaved
.”

Antonio (shown before one of his many marathon swims with lanolin on his chin and shoulders) is representative of most open water swimmers, “I have never shaved my body for an open water swim. It only makes sense in those areas that can cause an irritation. In my case, the hair in my face is the area that I put attention.”

Vicki Keith agrees. And if there is another who has had an excuse to chafe, it is Vicki with several cold-water solo swims over 24 hours. “Shaving down for open water swims – beyond normal shaving – never made sense to me. It is important to be clean shaven in areas you may rub: facial hair on men and underarms on women. For multiple-day swims, I would often use an epilator on my underarms to avoid stubble. Yes it hurt, but not rubbing was a priority. I did shave down for an endurance swim in a pool once, and I found it made absolutely no difference in my physical performance, but I felt cold earlier. Maybe it was psychosomatic, but it felt real to me.”

Some swimmers make different decisions depending on certain situations. American champion Mark Warkentin (shown above at the 2008 World Open Water Swimming Championships after qualifying for the 2008 Beijing Olympics) says, “I always shaved my head and my entire body for big races with water temperatures above 80°F (27°C). On the other side, I tried to grow a beard for 2007 World Swimming Championships in Melbourne [where the water was colder]. In Seville at the 2008 World Championships when the water temp was around 75°F (24°C), I shaved my arms and chest, but since we were all wearing swimsuits that went down to our ankles, I didn’t feel the need to shave my legs. That was the only race that was a bit of a toss-up because the water temperature was just below 75°F and I wasn’t sure if it was worth the cost/benefit of being colder versus the benefits of shaving.

I recommend shaving if the water is hot simply as a matter of keeping your core temp under control. It becomes more of a matter of what each individual swimmer would describe as their point of comfort/discomfort in relation to being cold versus overheating. I would assume that Stoychev and I are significantly different in terms of our temperature comfort levels and thus we would likely have different outlooks on shaving (for overheating purposes). As a pool swimmer, I was faster shaved than unshaved. So it wouldn’t make sense to pass on that obvious advantage, at least psychological, in open water swimming races as well
.”