Shaving Down In The Open Water Swimming World – Part 3 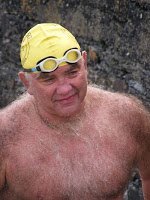 HUNTINGTON BEACH, California. One size definitely does not fit all in the open water swimming world. From training habits to feeding, open water swimmers follow an exceeding wide range of parameters.

And shaving down is no different.

An online roundtable discussion was conducted and the information-sharing was fascinating.

“Because of [my] body hair, lanolin/woolfat tends to stick to my back and may do for me what it does for a sheep on a cold, windy hillside. Below the water line, I don’t think it makes much difference as proved by the fact I don’t use lanolin any more and my first swim without it was my fastest England-France.”

Kevin brings up a point that many channel swimmers know well from their personal experiences. “I don’t think body hair in itself makes any difference when it comes to preserving body heat in water. It does not provide sufficient barrier – I don’t know anybody who’s got hair thick enough to risk being shot for their fur. By the same token, I doubt that shaving down makes any real difference to heat retention although it will undoubtedly make the skin more sensitive.”

And the aftermath is another issue for some. “I’ve never been brave enough to shave down,” said Kevin. “I know that even if it knocked ten minutes off my time for a Channel swim, it wouldn’t be worth the discomfort of it growing back.”

Dover Solo author Marcia Cleveland addressed other body part. “When I swam the English Channel, I didn’t put a razor to my legs for 2-3 months beforehand. But I regularly shaved my armpits, due to chafing. Water temperatures and an individual’s acclamation to the temperature matter. But, I know from experience, don’t give yourself a dry shave and then swim in salt water.”

Dr. Jim Miller, a member of the FINA Sports Medicine Committee, explains how shaving can help in competitive situations, “When you remove the top layer of epidermis and expose hair follicles. This is why some feel colder with a fresh shave. [On one hand], human hair is not dense enough to really retain heat in cold or warm water. However, we cannot undervalue how the athlete perceives their environment.”

When talking about competitive athletes, the discussions took on a serious tone because seconds do matter at among the fast elite. Dr. Miller explains, “After shaving, you get an increase in your feel of your arm and leg positions in the water. This can become important since it results in the athlete having a better sense of their stroke. This also helps when the athlete is attempting to stay loose and hang with the pack using an efficient strong, but easy, stroke as well as when the pace picks up. Remember, their stroke will already be affected by the salinity since their body position in the water will change also.”

Kevin describes the advantages of shaving. “If I were in the 10km Olympic event and split-seconds were important, I’d be prepared to shave down. The advantage might only by psychological, but it would be an advantage all the same.”

International Marathon Swimming Hall of Fame inductee Stéphane Lecat of France agrees for the competitive athletes. “Shaving down is good for competitive open water swimmers. It enhances your sensation and the feeling is much better after shaving [whether you are racing in] the pool or open water. I shaved down for my English Channel swim – my legs and arms only. When I swam the Channel, the water was not so cold. I also shaved for trials and international competitions.”

But he also acknowledged that shaving is not for everyone. “Shaving down is not necessary for masters swimmers. While the sensation and the feeling of the water are better for me, it is very personnel and some swimmers lost their feeling.”

Bill Ireland, a prolific swimmer from Southern California, understands the competitive angle. “I have seen open water swimmers who have shaved for races, not frequently but occasionally. I have never done it, but I haven’t shaved for a race since Nationals in 1981 – and I doubt if I ever will again. When I have seen people do it, its always been in warmish water and swimmers who were highly competitive.”

Jim McConica, an accomplished channel swimmer and extraordinary world-class pool swimmer, is flexible. “Shaving down all depends on the water temperature. One is certainly faster after shaving, but you will be colder. During my English Channel swim, I clipped only. I did get cold as the water temp during my swim was down to 56°F.”

Others are quite clear on their standard procedures. “The only thing I shave, and ever have shaved, is my face. I’ve never been competing at a level where hundredths of a second make a difference and, in any case, I don’t have much to shave. On longer swims I do get some friction burns around my shoulders if I’m not clean shaven,” said Simon Griffiths, publisher of H2Open Magazine.

Kevin knows well the potential downside of facial hair. “What I have found is that if I have even a slight stubble on the chafing points around my neck it quickly becomes a problem. Dead smooth is okay. Hair or a beard is okay. A stubble isn’t and the problem is that during a long swim it might start off smooth but the stubble has time to grow.”

Bill agrees. “I worry about shaving my face when I am without a beard because my shoulder rubs my chin when I swim. In salt water if I am not freshly shaven, I get a rash. Even if I am freshly shaven, I still get a rash if I am in the water for more than 90 minutes. On the other hand, pools and lakes are no problem. When I was on our Catalina Channel relay, I took along some shaving equipment so I could shave before I swam again. I may not have a 5 o’clock shadow but I do have a 3:00 am o’clock shadow.”

Channel swimmer Mike Shaffer understands both sides of the issue. “Aside from shaving my face to avoid shoulder chaffing, I have never shaved for an open water swim. However, if it was a big race like Olympic or World Championships or a national 5K, 10K or 25K championship, I probably would shave my full body. For cold open water swims, where time is really not the issue and survival and completion are the goals, I like to have hair since it makes me feel warmer. It may only be mental, but it seems real…like 0.5-1°F.”

Oceans Seven swimmer Darren Miller concurred. “I feel the advantage of shaving in competition is more of a psychological advantage than a physical one. When I am prepping for a marathon swim or pool competition, there is not a better feeling than to be tapered, shaved and gliding through the pool, or open water when you are at your peak. Shaving is one step in the process of mentally preparing for competition, because it gives me peace of mind knowing that I am doing everything I can to prepare for the battle ahead. It allows you to get into the necessary zone to be physically and mentally prepared to compete at your best.”

Dr. Lyle Nalli knows his priorities. “Over the years I have never felt the need to shave down. Keeping warm was a priority.”

Triple Crown of Open Water Swimming member Jim Barber agrees on priorities and needs of the various demographic groups in the open water swimming world. “Shaving down is good for those at the upper end of competition and competing for seconds in a race. It engages the mind for mental preparation. Your skin is sensitive in the shorter races and you can feel it in the pool competitions for races under 1500. [But] in the open water, the sensation goes away and it’s business as usual.

If you are at the top end of your [masters] age group and you are in your prime, shaving will help. But beyond [the age of] 40, shaving down does not give you the advantage that you think it does. I didn’t shave for my channel swims (English or Catalina). I never shaved for solos
.”

Darren concurred. “I do not want to remove the top layer of skin by shaving, since I had memories of being cold much quicker in pool competition when I had shaved my entire body. Anyone who has swum the English Channel knows of the water temperature.

Prior to my English Channel and Catalina Channel swims, I chose to clip my body hair with a pair of electric clippers so the channel grease would be able to stick better. Yet I did not remove the top layer of skin so I would not get cold as fast. I had to take every advantage I could to help, as I only had access to 82°F lakes and rivers prior to going over to England.

But for the Molokai Channel due to the warm water, I chose to shave my entire body because I was only using channel grease in specific areas prone to chafing. The temperature of the water was not an issue in Hawaii, therefore shaving the top layer of skin was not a problem in regards to getting cold

But leave it to International Marathon Swimming Hall of Fame inductees Sally Minty-Gravett of Jersey and Ned Denison in Ireland to sum up what most open water swimmers think and do. “I would imagine staying hairy for big open water swims. It keeps you warmer,” said Sally. “It’s only pool sprinters and triathletes who really need to ‘shave off’ milliseconds.”

“I have never shaved for the open water,” said Ned, a former water polo goalie. “I only shaved once before – for the national water polo national championships…and we lost.”