Shawn White, Apolo Ohno And Ice Swimming In The Olympics 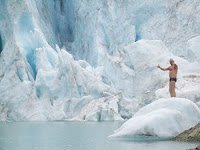 Ram Barkai has a dream. An interesting, innovative goal: to get ice swimming of 1K in the Winter Olympics.

The Winter Olympic Games have evolved since the first winter sports celebration in France in 1924. And it will continue to evolve as it plays to growing television and Internet audiences around the world. From its incorporation of sports that push the envelope like luge to sports that require risk-taking artistic flair like the snowboarding’s half-pipe, Winter Olympic viewers love seeing the athletic daring of its Olympic heroes.

Whether it is flying down a mountain at incredible speeds or ski jumping off large hills, the daredevils of the Winter Olympics seem to be a bit different than the athletes of the Summer Olympics whose motto is Citius, Altius, Fortius (Latin for Faster, Higher, Stronger).

With a white background of snow, the Winter Olympics are colorful with characters.

So adding an extreme swimming event in a mountaintop lake where icemen and icewomen take to a short 1-kilometer swim of under 5°C (41°F) without neoprene seems like a great made-for-television daredevil event that truly does require mental and physical preparation with a sufficient bit of athletic flair and obvious inherent risks.

But with ice swimming growing about the world, as commemorated by the World Winter Swimming Championships and the International Ice Swimming Association, Ram’s Olympic dream certainly seems to have potential to come out from the cold and into the Olympic family.