Sheer Sense, The Start And Finish In The Cook Strait 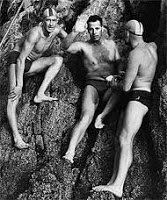 There are very few beaches to leave from or finish in when swimming across the Cook Strait between the North and South Islands.

International Marathon Swimming Hall of Fame Honour Swimmer Philip Rush explains, “Where we start from are sheer rocky cliffs straight up. So it is very hard and dangerous to completely clear the water. We get the swimmers as close to clearing water as possibly safe so they don’t get cut on the sharp rocks…as bleeding in the Cook Strait may cause large fish to become nosy.”

The finish presents a similar problem.

“There is one beach [to finish]. If we hit it, we are doing well. But if we don’t, there are sheer rock cliffs to touch. We get the swimmer to touch the cliffs and if they can clear the water safely, that is fine.

As long as they touch the rocks and try to clear water, that is fine [for an official finish]. The safety of the swimmer and commonsense gives us the best results.

Barrie Devenport, shown on right resting on the cliff walls on Wellington Rock on South Island shortly after his historic finish in 1962, was the first man to cross the 26 km Cook Strait in 1962. He start at Cape Terawhiti on North Island and finished 11 hours 20 minutes later on South Island on his second attempt.