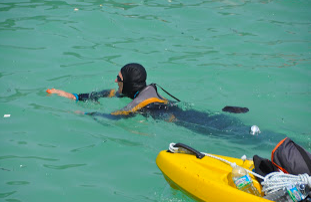 Between 2004 and 2011, Australian Sherrin Hibbard worked as an English teacher on Jeju Island off the southern coast of South Korea.

Then she was inspired to attempt an unprecedented circumnavigation swim in her adopted country, a 160 km stage swim that took her 44 days to finish from July 31st to September 12th 2010.

“I was a commercial fisherman for 12 years and very aware of what was going on with the oceans – overfishing, plastic, pollution and coastal habitat destruction. It was summer on Jeju and I was sailing regularly and diving with the haenyo [female Korean divers*].

My mum came to visit me from Australia and we went sailing a lot. Most days, we were literally sailing through garbage
.”

And she became very upset about the floating mounds of trash.

“Not long after, I was following Martin Strel’s swim down the Amazon. I figured if he could do that, then surely I could swim around Jeju. Everyone said I couldn’t and I spent a lot of time wondering if they knew something that I didn’t. But no one told me why I couldn’t do it. I met kayaker Steve Oberhauser, got my Korean friends, Hyun Sung-Mi and Jisu Oh involved, and the Jeju Big Swim was born.”

Sometimes, Steve had to call out so I wouldn’t swim headlong into a plastic bag or an empty oil container floating in a pile of muck. But what was more disturbing was just how much garbage was under the surface, distributed throughout the water column as far as I could see. In too many places, I would look down and see ramen bowls, drink cans, ice cream wrappers, cigarette lighters, foil and plastic packaging, plastic bottles and bottle caps, plastic forks and spoons, chopsticks and chopstick wrappers. I saw frightening amounts of polystyrene foam, hundreds and hundreds of paper cups, and thousands of plastic bags, in every state of deterioration from whole bags to small fragments. And I saw plastic, plastic and more plastic. I was shocked and saddened to see small schools of fish eating it.

I saw with my own eyes the terrible state of the sea around Jeju, the result of pollution, overfishing, and habitat destruction.

She recalled her training for her 44-day stage swim, “I did a couple of 6-hour training sessions in the pool – but when I got into the ocean, it was like I hadn’t even trained. But it was a simply amazing experience being so connected to the sea and seeing the island from a whole new perspective.”

A friend made a film documentary and the Korean media covered it. “A huge amount of people helped and supported us and it was a pretty big deal. The Coast Guard heard about it and most days we could see them out there keeping an eye on us. On calm days, they kept their distance, but on the rougher days – and there were some really rough days – they would be closer.

The aim was to raise environmental awareness and with the media’s help, I believe we started something that continues to this day
.”

Nautasyreni now lives and works on a remote coral atoll in the middle of the Pacific Ocean called Palmerston Island in the Cook Islands with more ocean adventures on her plate.

For more information and details of The Jeju Big Swim, visit here.

* Haenyeo (해녀 or sea women) are female divers Jeju Island whose diving tradition dates back to 434 A.D. 11-year-old girls would start to train to become haenyeo beginning in shallow water, working for 7 years to develop themselves to depths up to 30 meters holding their breath for over 3 minutes while they caught abalone, conch, octopus, sea urchins, sea squirt, brown alga, top shell, sargassum, oysters, sea slugs, etc. Before wetsuits were available, they wore were cotton swimsuits. In the winter, haenyeo could stay in the water for up to an hour. During the summer, they stayed in the water for up to 3 hours. With wetsuits, haenyeo could stay in the water up to 6 hours during the winter.