Shier Mendelson, A Canadian Pioneer In The Open Water

Shier Mendelson was born around 1895 though the exact historical details are unclear as his family was in transit from Romania to Canada during that time. Mendelson won the 1.5-mile ‘Toronto Across the Bay” competition in Ontario, Canada for the first time in 1913.

The Toronto Across the Bay swim started at the Harbor Commission wharf and finished at the Toronto Swimming Club house at Hanlan’s Point.

The Toronto Swimming Club in that era would not allow Jewish kids join the club and enter the race, but the young Mendelson decided to jump in from the spectator’s area and finished first in a bold one-upmanship. In subsequent years, the local club changed its policy as Mendelson continued to show his prowess and went on to win the race in 1915, 1919 and 1920 [note: the race was not held during the World War I years].

With a passionate interest in open water swimming, Mendelson and his younger Canadian friend George Young got an old motorcycle to drive across the continent to California to enter the Wrigley Ocean Marathon. Despite their motorcycle breaking down, the pair were undaunted and went onto to California by hitch-hiking the rest of the way.

After this arduous journey across America, Mendelson decided the Pacific Ocean water was too cold for him to enter the race at his advanced age (30 years) at the time. But Mendelson was only too happy to help his traveling buddy across the Catalina Channel and win the Wrigley Ocean Marathon to become the first person to cross the Catalina Channel.

Mendelson told his family countless stories about how difficult it was for 17-year-old Young upon winning the prize money. It was sadly not a feel-good story for a teenager flush with cash in Los Angeles in the 1920s. Family members recall that even the drivers who picked up two Canadians hitch-hikers tried to get a piece of the action. 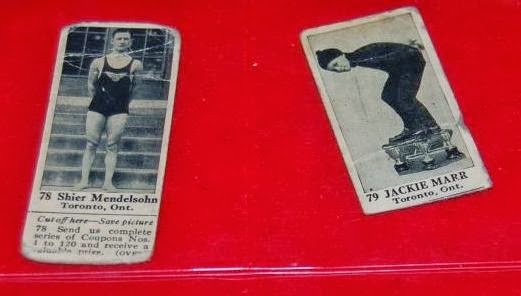 Later in the 1950s, Mendelson not only participated in several Lake Ontario races, but he also coached other young people to participate in these races and other races around the island offshore from Toronto. His enthusiasm for sharing his passion for swimming continued through his life despite not being able to compete in the Olympic Games due to a minor sponsorship for Sloane’s Liniment which effectively ruled out his required amateur status.

Lower photo shows Mendelson on a collectible card from Dominion Chocolate circa 1925.