Shifting From Warm To Cold, From Jellyfish To Sharks 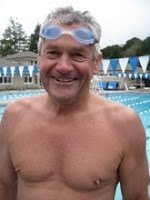 Vito Bialla announced another intrepid swim only a few weeks after wisely pulling his team 63.8 nautical miles (118K) from the start in the jellyfish-strewn waters of the Sea of Cortez Swim in Mexico.

“Our team of Night Train Swimmers expects to take 10-14 hours depending on weather conditions, wind and water temperature.”

After swimming with and escorting his teammates for over 36 hours in the warm waters of Mexico, fighting jellyfish, currents, strong winds and serious surface chop, Vito shifted his next adventure to the colder, Great White Shark-populated waters west of San Francisco Bay.

“Water temperatures are typically range from 51-54°F (10.5-12.2°C), but the team will follow English Channel regulations and swim only with standard swimsuits and a single non-neoprene cap.” 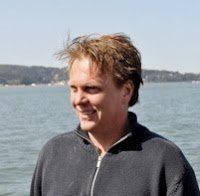 Vito will be one of six San Francisco-based swimmers who will attempt to complete the first relay 30-mile swim from the Farallon Islands to the Golden Gate Bridge in an area known as the Red Triangle, one of the world’s most dangerous areas for swimmers.

The Farallon Swim will be filmed by Sorcher Films and documented by Jim Hughes Photography with real-time tracking available. 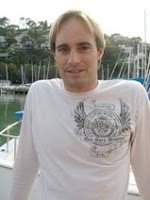 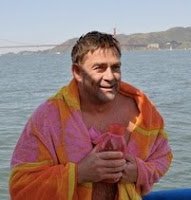 “Boaters can welcome us as we approach and reach the Golden Gate Bridge on the afternoon of June 19, sometime between 4-8 pm.”

“After reaching the bridge, the team will proceed with its escort boats to the San Francisco Yacht Club. Boaters can monitor channel 68 for information.”

In contemporary society where we drive cars everywhere, take elevators and escalators, warm food in microwave ovens and shop for prepared meals, this swim takes us back to earlier eras of adventure and risk-taking.

It is always thrilling to be in the midst of modern-day pioneers who are willing to face significant risks head on. Whether it is a large apex predator like the Great White Shark or its smaller predator, the Portuguse man o war, humans are the weaker prey among many different types of aquatic denizens of the depths. Watching this swim is like watching a movie…but it is real life with real dangers and real rewards.

As the swimmers rotate one-hour legs in the dark, violent, bone-chilling ocean off of San Francisco, the support crew and the swimmers will forge emotional bonds as they deep look upon themselves and their teammates to overcome these unpredictable hazards. Like a strongly-knit family, they will not give up on each other, but at the same time, they will immediately stop if anyone is close to danger.