Shipp Fits The Bill: NEKOWSA Swimmer Of The Year 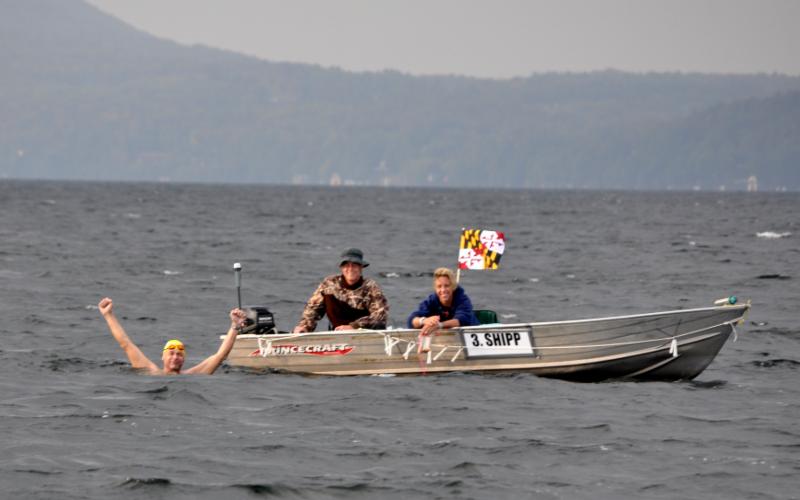 Picking the Northeast Kingdom Open Water Swimming Association Swimmer of the Year for 2015 is not just a time to spotlight a single extraordinary swimmer, we relish the opportunity to look back over a truly robust year of swimming and think on the contenders. It lifts our spirits and lightens our step to contemplate so many achievements and the strong athletes and great good spirit that they embody. So to select one is to acknowledge many.

And, what a fierce pride of lions to choose from. Here are just a few:

Starting with one of last year’s winners, Vera Rivard of Springfield, New Hampshire, who at age 10 swam her first 1-mile competitive open water swim in July of 2014 and went on to swim 3 miles in rough water in August. She continued her “stretch” this year by swimming 4 miles at Son of a Swim in June and finishing 11th out of 22 females in the 6-mile course at Kingdom Swim in July with a time of 2:53:03! But then, she swam Willoughby (5 miles) and finished right in the middle of the pack among women. Impressive enough for an 11-year-old, but the next day at Lake Caspian she won the three mile swim ahead of all females, young and old with an awesome time of 1:22:32, even as she took a moment to climb up and jump off Bathtub Rock at the turnaround! And her 8-year-old sister, Margaret, is also a worthy contender, completing her very first 1-mile competition at Kingdom Swim and then finishing her summer with her own 3-mile swim at Caspian.

Or how ’bout any or all of the three Knights Memphre who travelled to Inverness in August to swim Loch Ness, 20+ freshwater miles in the low to mid-fifties In Search of Nessie. Only about 10 or 15 swimmers have completed this swim. Sarah Thomas of Conifer, Colorado, Craig Lenning of Denver, Colorado, and Elaine Kornbau Howley of Waltham, Massachusetts, are three extraordinary ultra-marathon swimmers, Triple Crowners all, each with some totally amazingly long and difficult swims under their belts, including In Search of Memphre, but also including many other 40 to 50 mile swims all over North America. They took on Loch Ness with eyes wide open about just how difficult this cold water swim could be. Each took on a deep gut check and swam. Each completed the swim with a fist in the face of the daunting cold that has intimidated so many other swimmers. Their accomplishment established the Triple Crown of Lake Monster Swims: Tahoe, Memphremagog, and Loch Ness. This truly was the most adventurous expeditionary open water swim of the year, anywhere.

Or the young guns, Eva Fabian, 21, of Keene, New Hampshire and her training partner Chris Deeghan, 19, of Australia and Keene State who smashed the record on Kingdom Swim’s 10-mile course each at 3 hours 19 minutes. It was a total thrill to watch them fly through the waters of Lake Memphremagog: 90 strokes per minute and they weren’t even breaking into a sweat.

Then there’s our Swim Angel, Cynthia Needham, 67 of Stowe, Vermont. Cynthia’s door to marathon swimming in Northern Vermont was opened several years ago with the use of her wet suit and the tutelage and friendship of Charlotte Brynn, Executive Director of the Swimming Hole in Stowe, Vermont. This year she showed up to open the year without her wet suit. She skinned her way through the entire season, even Newport Vampire Swim‘s long course from the ramp to the bulkhead at the City Dock and back. And there she was, swimming at Prouty Beach on January 2nd, in training for this year’s Memphremagog Winter Swim Festival. Skin, of course.

And more than worthy of consideration: Shannon House Keeghan, of Talent, Oregon, and Tiffany McQueen of Helendale, California who swam all 8 lakes and 45 miles of Kingdom Swim Week and Amanda Hunt of Chicago, Illinois, and Katie Benoit, of Colorado Springs, Colorado, this year’s Swimmer Scouts who both completed the 25-mile swim. All four laid down some impressive swimming with a sense of joy in the challenge, reflecting the true spirit of all of our games: Just for the Fun of It.

But, in the end, the choice this year is easy and long overdue. Bill Shipp, 55, of Mitchellville, Maryland gets the nod as this year’s NEKOWSA Swimmer of the Year. Swimming, crewing, motivating, and organizing. He is a swimmer’s swimmer, a friend and quiet source of inspiration to many. His journey speaks volumes. In 2010 he showed up on the 10-mile roster of the Kingdom Swim. It was the longest open water challenge of his life. He completed in seventh place among the men with a very competitive time of 4:28:54. That fall he was on the top of the world, personally, professionally, and athletically.

Then he was diagnosed with prostate cancer. He took it head on and beat it. He used the 2011 Kingdom Swim as a motivator for his recovery and returned in July, finishing third among the men and just 10 minutes behind his 2010 time. His stretch was just starting. That very same year, when Elaine Kornbau Howley took up our invitation to start an amateur swim the 25-mile length of Lake Memphremagog between Newport, Vermont and Magog, Quebec to promote a more open border on the 10th anniversary weekend of September 11th, Bill was right there among the 9 solo Swimmer Scouts who signed on for this inaugural adventure. It was an epic swim in the face of 25 to 30 mile per hour headwinds, right out of the gates at midnight. Only four swimmers were able to complete the swim that year. Liz Fry, Charlotte Brynn, Greg O’Connor, and Elaine. But Bill was undaunted and right back at it the next year, finishing in a time of 12 hours 38 minutes. The look on his face immediately after the swim said it all. He had completed a monster of a swim and in doing so, he had become the monster.

A moment to look back and maintain, and then in 2014, he won the inaugural 15-mile (24.1 km) Border Buster (among men), he won Boston Light Swim outright, and completed the English Channel. In 2015 he completed the Manhattan Island Marathon Swim in July and then the Catalina Channel in September to become one of only about 100 people in the world who have completed the Triple Crown of Open Water Swimming. His Catalina crossing was challenging. He was nauseous in the waves through the night. We had a rough ride over and the wind took a few hours to back off after the start. But, his game day determination is now the stuff of legends. He was not going to be denied. His accomplishments are hard earned and inspirational.

Bill has a quiet modesty and sense of humor about all of this, and he gives back. He raised money trying to help our failed recreational center when it was struggling to survive. He started his own charitable fund, Waves of Hope. In 2013 he crewed for Sarah Thomas during her historic 50-mile double crossing of Lake Memphremagog, spending 30 hours in a 16-foot motor boat with Sarah’s husband, Ryan Willis, and bailing the boat with his boot as they headed out in 2 to 3 foot waves. The very next year he won the inaugural 15-mile Border Buster. This year he returned, not as a swimmer, instead he co-piloted a pontoon boat to support other swimmers. Bill is a member of the boisterous Arundel Breakfast Club, one of several tribes of Crabby Nation that regularly show up for Kingdom Swim. He has long been on the voluntary organizing committee for Northeast Kingdom Open Water Swimming Association swimming. He is also a quiet mentor to many who venture forth into the world of open water swimming.

It is an honor to call this man a friend and to be a part of his journey. And, I should add, this selection comes with a warning. Beware when you take your first dip in the magical waters of Mighty Memphremagog. It could be the start of an extraordinary open water journey. Right Charlotte? David? Bethany? Vera? Paula? David?