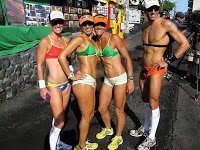 The triathlon community has developed a number of interesting rituals, unique traditions and festive fun.

Before the annual Ironman World Championship in Kona, Hawaii, there are a variety of events, get-togethers and expos. One of the offshoots – the Underpants Run – are enjoyed by some and criticized by others. But at the end of the day, the Underpants Run draws a lot of attention for showing off the fantastically fit bodies of triathletes. A lot of skin has its way of getting attention.

It reminds us of a non-wetsuit open water swim, where there is also a lot of skin showing. But in contrast to the generally low body fat percentage of many triathletes, open water swimmers have a bit more bioprene.

And it seems most people at open water events are happy to be in their own skin. It is not a beauty contest or a race towards the lowest body fat – it is merely a celebration of fitness, adventure and competition in the open water world.

Photo by Randy Magnus for the Kona Times.