Simon Griffiths Takes H2Open On The Road To Spain 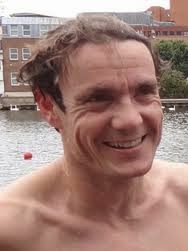 There are only so many pages in the H2Open Magazine and the ultimate decision-maker of what gets into each issues is Simon Griffiths, the chief editor and visionary behind the world’s first open water swimming magazine.

So when he decided to swim in the 12 km race at the Cala Montgó Swim Festival, race director Aida Molina was more than happy.

“Swim the Costa Brava team has enormous pleasure in working with Simon Griffiths on several occasions, including the London Tourism Fair, the 2013 Global Open Water Swimming Conference in Cork, and the Tuna Race in Catalonia. Speaking with Simon is and always has been a very rewarding and enriching experience.

The Cala Montgó Swim Festival is part of the Zoot Swim Series Circuit, a three-race open water swimming series organized by Culture Sport and sponsored by the Tourist Board of the Costa Brava Pyrenees Girona, Zoot, Bunch and Multipower.