Simone Ercoli vs. Ivan Afanevich, Round 3 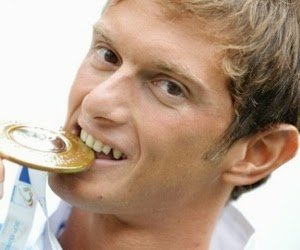 After a thrilling start in Argentina, the world’s fastest marathon swimmers are on the beach at the Ocean Maya Royale hotel in Playa del Carmen near Cancún, Mexico. The group of 11 women and 21 men from 15 countries will participate in the third stage of the FINA Open Water Swimming Grand Prix on March 29th, a 15 km circuit salt water course in the Caribbean Sea.

On the men’s side, Simone Ercoli of Italy and Ivan Afanevich of Russia are the two pre-race favorites.

Ercoli won the the first stage on the circuit at the 57 km Maratón Acuática Internacional Santa Fe – Coronda while Afanevich won the second stage at the 88 km Maratón Hernandarias-Paraná. Damián Blaum and the rest of the field are sure to chase the European pair.

The following weekend on April 5th on the same course in Playa del Carmen, another group of the world’s fastest male marathon swimmers will compete on the second stop of the 2014 FINA 10 km Marathon Swimming World Cup including 2012 Olympic silver and multi-world champion Thomas Lurz of Germany.