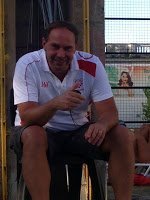 Slaven Šitić is the father and swimming coach of Ivan Šitić, and Karla Šitić and Ivana Šitić, sisters and a professional marathon swimmers from Croatia.

Karla qualified for the Olympic 10K Marathon Swim at the 2012 London Olympics, finishing 12th while Ivana competes on the FINA Open Water Swimming Grand Prix circuit. And he knows what he is talking about when it comes to open water swimming as Slaven won the Faros Maratón in 1984 and finished third in 1980 and 1982.

He is also an engineering professor specializing in welding. He teaches 50 students in a 3-year program that prepares them for projects for Audi and Ferrari. His engineering prowess has enabled him to create all kinds of things including a boat and a 2-person submarine. He also started a sailing team 10 years ago.

“All these experiences are valuable to my open water swimming coaching knowledge. I love what I do for work and in the open water swimming world.” That much is very clear as he watches and coaches his daughters and helps others on the FINA professional marathon swimming circuits.