Slowing Down, Speeding Up Along The Danube 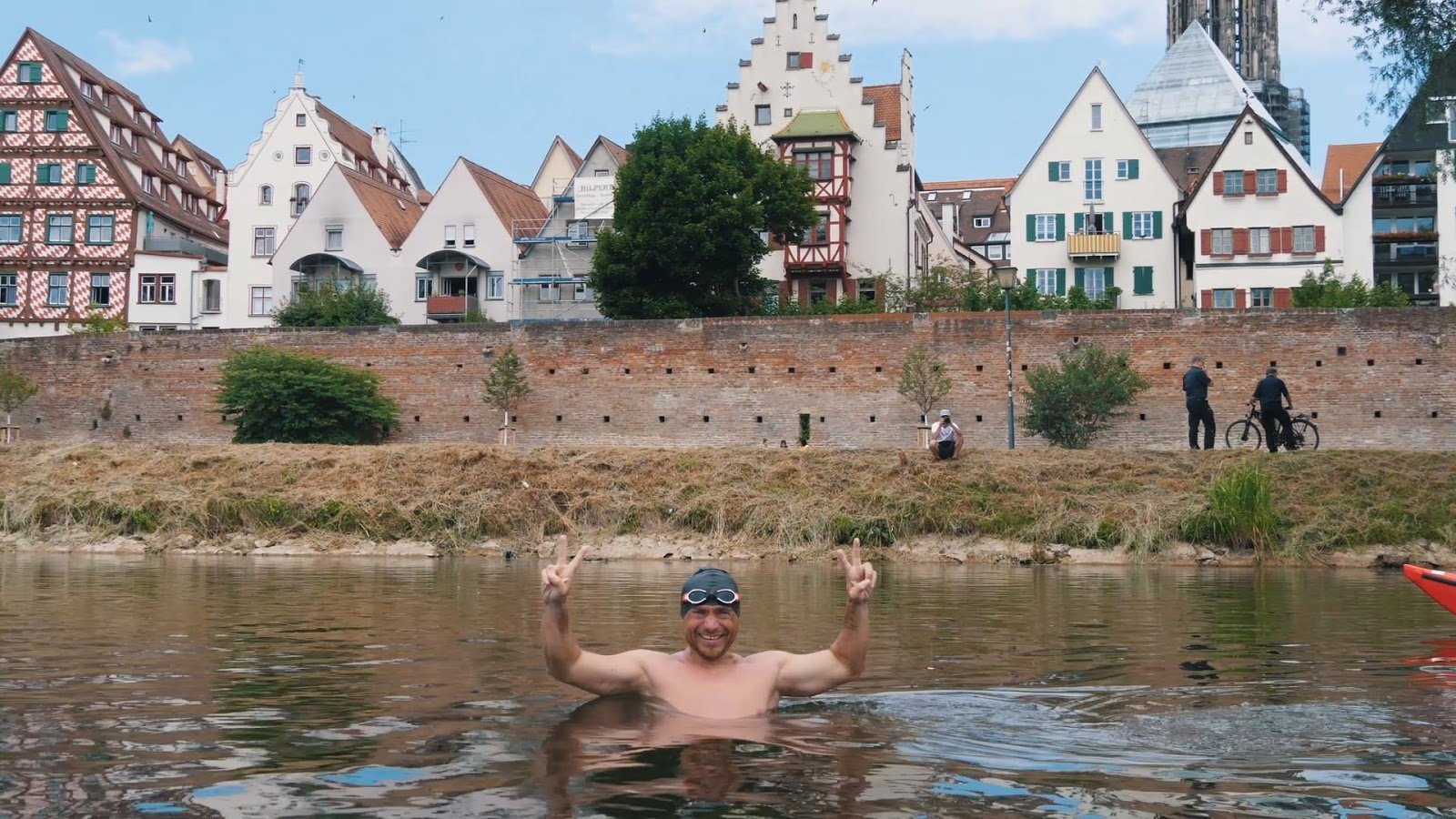 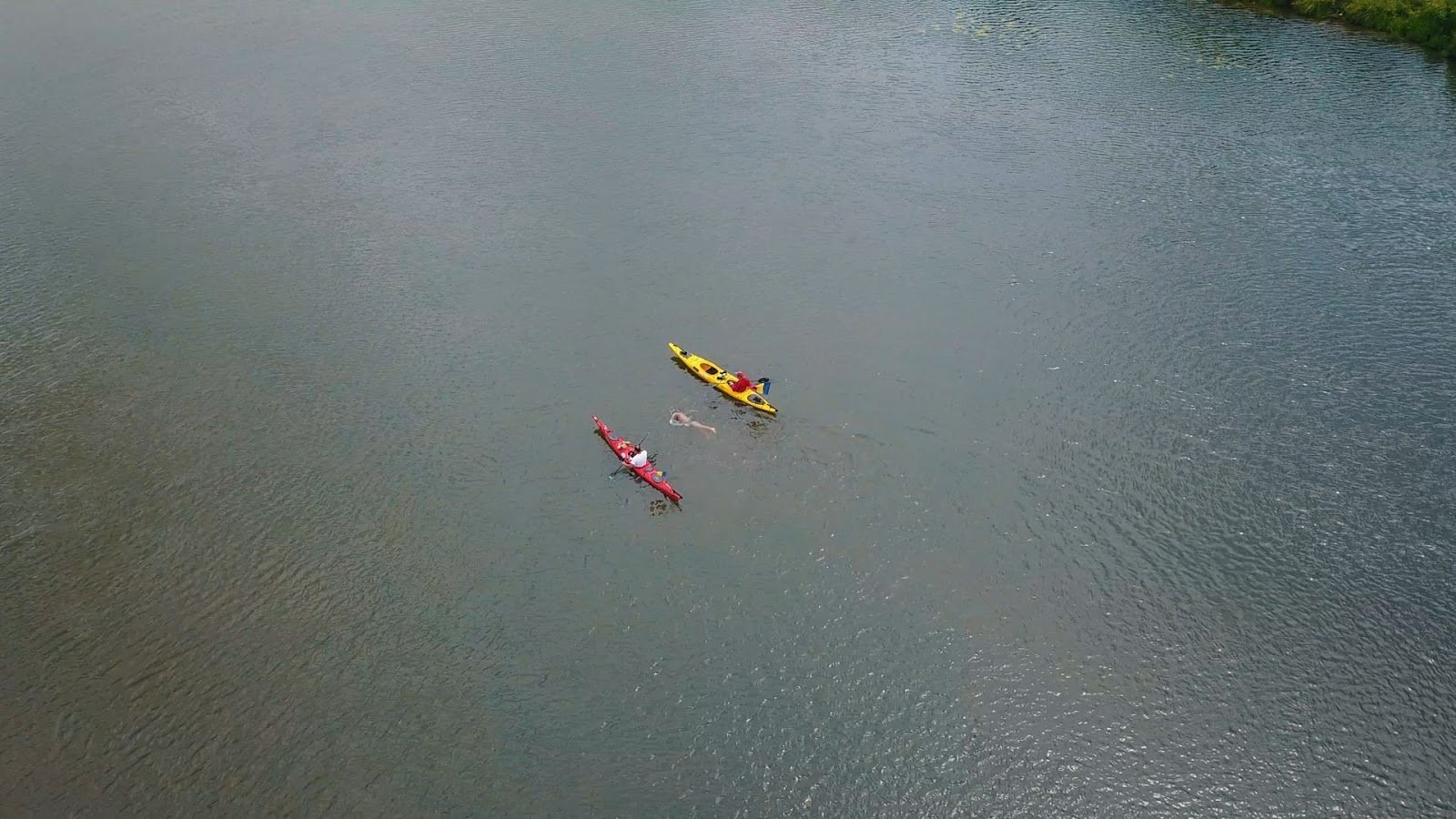 Romanian Avram Iancu continues along his scheduled 60-day stage swim of 2,860 km along the Danube River through Europe.

The 41-year-old librarian from Transylvania started his stage swim from Donaueschingen in the Black Forest in Germany. He is now heading into Day 28 as each day is a dynamically different replication of the day before.

Day 24 on July 13th
Sunshine and warmer water temperatures definitely contributed to Iancu’s 30 km stage swim today. The first 6 km were through still waters resembling a lake before passing another dam. A strong wind generated waves on the river which pushed Iancu forward and lessened the effects of the challenging water conditions.

“I hope the flu-like symptoms I experienced today will not develop into anything more serious. After passing Linz, the third-largest city of Austria and capital of the state of Upper Austria, I stopped to meet the few dozen Romanians who had come to cheer us on. Together they danced the traditional Romanian dance ‘hora’ which boosted my spirits.”

Day 25 on July 14th
Iancu swam 26 km, starting and finishing in the still waters around Austria’s numerous dams located on the Danube. He passed another milestone which cheered him up. One thing which became worse today though – every time he stopped for a break to warm up or eat, he became horrified to return to the water; it was an overwhelming battle in his mind.

“Every time I am about the get back in the water, my body starts shaking – not because of the cold or other external conditions, but due to something coming from inside of me, my heart or soul. Something that I cannot define. It has become more and more difficult to fight. It’s the fight I have to have with myself for pushing to my limits, not only physically but also mentally.”

Day 26 on July 15th
Once a week, Iancu enjoys a day when he takes things slower. “Today is one of those days.”

The rain dampened the mood and pace. Once he reached the first dam, the rain intensified. The team found shelter at the dam’s information office where they created new friendships with a group of Romanians cycling from Passau to Vienna. After the rain stopped and their feelings were uplifted, Iancu swam another 11 km for a total of 16 km for today’s stage swim. “Even though it’s not that much, I am very pleased with today’s results given the weather conditions. Tomorrow we plan to start very early and slowly get closer to Vienna. Six more dams to go.”

Day 27 on July 16th
Iancu started off very determined to swim a significant distance today, but the Danube had other plans. While swimming through a mountainous area, the cold waters forced him to stop after only 3 kilometres. “I felt the urge to run somewhere, but there was nowhere to run to – both the water and the outside air were very cold. All I could do was push forward despite my body’s uncontrollable shivering.”

He eventually swam 24 km even though he felt he could swim more. “I am very grateful I did not get a serious flu, but I am still worried that if I continuously push my body to the limits I won’t be this lucky anymore. The weather is supposed to improve tomorrow, so I hope I can push forward more over the next days.”