Snap is Back Bigger And Better Than Ever 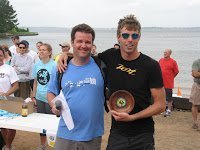 The Snapping Tortuga is getting bigger and better.

The early-season event drew a competitive field of swimmers including 2011 Ironman Korea champion Balazs Coske (pictured on left) who was the overall 5 km winner with a finishing time of 52:13.

His female counterpart on the victory podium was 2008 Olympic Trials qualifier and former University of Texas swimmer Traci Van Matre with a time of 55:24 over the flat lake course.

The Snapping Tortuga also attracted high school phenom Alicia Finnegan who competed in last summer’s USA Swimming Open Water Nationals in Fort Lauderdale. In her inaugural Snapping Tortuga appearance, the 14-year-old was in a goggle-to-goggle battle down the finish with Coske as she won the 5 km Junior Division with a time of 52:16.

Originally from Hungary and competing in his first Snapping Tortuga, Coske explained the appeal of this race, “Before I moved here, I heard that Texans know how to make you feel welcome and they have. When I heard about the Snapping Tortuga, I knew it was a great opportunity to take part in this local event and get ready for Ironman Texas. From what I saw, this race is only going to get bigger and more competitive, and I look forward to swimming in The Snapping Tortuga again.“

Besides the dramatic increase in entrants, the Snapping Tortuga saw a massive increase in the number of sponsors for the event including presenting sponsor Sterling Ridge Orthopaedics and Sports Medicine and official sponsors Energy Lab Nutrition, Swim Shops of the Southwest, Panga Surf, Nelson Wood, Outrival Racing, Dana Lyons Finish Strong Coaching, Magnolia Aquatic Club, and North Water District Lab Services. Outswim Cancer had a strong showing at the event and their swimmers, through pledges, raised US$5,000 to fund cancer research.

With the growing success of the Snapping Tortuga, the organizers have planned for the future with another 500 meter, 2.5 or 5 km races for Junior and Masters Divisions on October 14th at Seven Coves of Lake Conroe, Texas. For swimmers looking for the ultimate challenge, the Snapping Tortuga will introduce the Bale of Tortugas on November 10th where swimmers can compete in a four-person 10 km relay or choose to swim a 10 km solo.

For more information about The Snapping Tortuga Swim Series and the final results, visit www.SnappingTortuga.com or the visit their Facebook Page.