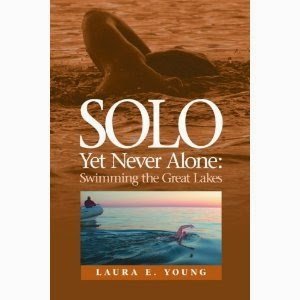 Sportswriter Laura Young features over 40 swimmers in her new book, In Solo, Yet Never Alone: Swimming the Great Lakes.

Why would anyone swim the Great Lakes? Young delves deeply and profoundly into that question.

Her book addresses the mindset of people who challenged themselves in the big water of the Great Lakes from 1954 to 2012.

The Lake Ontario swim of Marilyn Bell 60 years ago is part of the open water swimming folklore, an historic watershed in the annals of Canadian swimming and risk-taking adventure.

Others who followed, from Vicki Keith to Cindy Nicholas, include 74 swimmers who have made 66 crossings of Lake Ontario, 19 of Lake Erie, five of Lake Huron and Georgian Bay, two of Lake Michigan, and two of Lake Superior. Each of them has an interesting story to tell.

These adventurers – a few pros, but mostly amateur and mostly Canadian – opened up to Young who spins a fascinating story of their successes and journey to swim from shore to shore.

Young interviewed over 40 Canadian swimmers, including Marilyn Bell and Vicki Keith, and augments their stories with 9 course maps, 27 media and swimmer-supplied photos, and 14 full color photos.

An experienced open water swimmer herself, Young explores how the athletes deal with success and failure when swimming the world’s largest network of interconnected lakes. As part of her research, she accompanied a crossing in 2010 and learned first-hand the power of the Humber River current and the waves on the Toronto side of Lake Ontario.

Young explains why people choose to do great things and how they motivate themselves to keep going. She describes the examples of hallucinations and seasickness that have occurred on these fresh water marathons. As these swimmers know first-hand, the Great Lakes can be full of waves, weather, and attitude where turbulence can trump training, tactics, and team.

Young has been writing about sports for over 25 years. Born in Halifax, the Canadian writer has a regular sports column for The Sudbury Star and other publications. A founding member of Laurentian Masters Swim Club, Young is also a lifeguard, swimming instructor, and canoeist.

Solo, Yet Never Alone: Swimming the Great Lakes was released in bookstores on May 15th and can be purchased online from the publisher Scrivener Press.