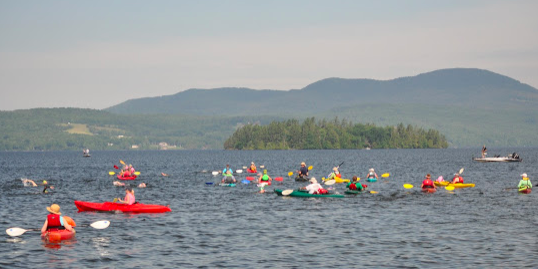 “Son of a Swim was held on June 30th is not an open water swimming competition; rather it is an opportunity to swim a distance and get lost in the Islands of Derby Bay,” explains race director Phil White.

“We allow swimmers to alter their course depending on conditions and how they are feeling during the swim. We swim from The Clubhous in Newport, Vermont to and around the islands in Derby Bay. The 6.5-mile and 10-mile courses cross the U.S. – Canadian border. Swimmers need a passport or an enhanced drivers license. It is a great way to kick off the summer of open water swimming in the Kingdom.”

Canadian and U.S. border officials helped facilitate the border crossing of swimmers, kayakers, and boaters around Province Island and back. Over the course of this summer, 70 open water swimmers will cross the border with various swims, including Son of a Swim, In Search of Memphre, Border Buster, and the Clubhous Swim. Border officials have been extremely helpful in making these adventurous swims possible.”

The Kingdom Swim on July 28th is in its 10th year. It is the signature event for 12 days of open water swimming in the Northeast Kingdom of Vermont and the Eastern Townships of Quebec. For more information, visit www.kingdomgames.co.