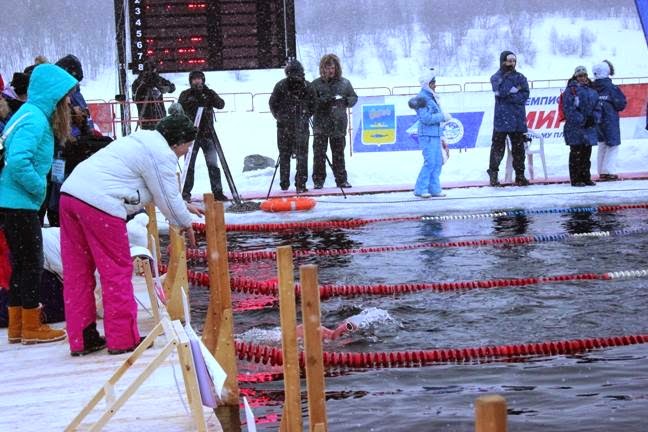 Photos courtesy of Nuala Moore, above the Arctic Circle in Murmansk, Russia.

“Ram Barkai made the World Ice Swimming Championships in Murmansk possible,” said American ice swimmer Mo O’Reilly. “It has been incredible journey. We are still swimming and the team keeps getting larger and more magnificent.”

A clear evolution apparent in the ice swimming world are the safety protocols and procedures.

While planning safety protocols on paper is one thing, another completely different aspect of safety is execution.

That is, what happens in the ice swimming world when there is an emergency? How quickly is a competitor saved? What happens if someone goes under or needs to be saved while swimming in water under 5°C? Who dives in the water to rescue a swimmer in need, especially when the water is close to 0°C and the air temperature is under 0°C? What happens under such condition? Are there lifeguards?

While O’Reilly was competing in the 1000m swim at the 2015 World Ice Swimming Championships in Murmansk, there was a rescue that was caught on film. The rescue personnel were seen executing a safe on Russian swimmer Olga Andryunina.

Irish ice swimmer Nuala Moore recalled the rescue, “It was very quick, the diver was in a flash. Her recovery was quick. Divers act as lifeguards and are at both ends of the pool and also positioned at the sides of the [25m] pool.”

O’Reilly said, “It was scary, but Olga was OK.”

Moore further explains, “Rescues are mostly visual, quick and tight to the swimmer. So we all have a second (a knowledgeable teammate) named before the start.”

In the case above, a diver was alerted to the swimmer who raised her hand after the 200m mark in the 1000m race. He jumped in to help. There was a period of time before they removed her from the pool as the lifeguards had to take her down to the end of the lane because the sides of the ice pool were too rough to slide her out.

“They didn’t have a smooth exit,” observes Moore. “But it was effective and she was not challenged. She was placed on a stretcher and taken to a full medical tent within 100 meters with an ambulance standing by.”

Whether the rescue is made in an ice swim or a tropical swim, the toughest part of a rescue is often getting the athlete out of the water. This is especially true if the swimmer has lanolin or sunscreen on or there is a kayaker far away from the shoreline. Paddle boards, RIBs or JetSkis with sleds are often easier to bring a distressed or limp swimmer to shore or to a larger rescue vessel.

Ultimately, her recovery was swift, but if her rescue was in the middle lanes, the efforts would have been a greater challenge.

However, the organizers in Murmansk with the assistance of the International Ice Swimming Association have implemented a number of additional safety measures. “Safety divers were all over the pool area in order to quickly get to swimmers,” said Ram Barkai.

“The pool had 2 divers [shown below] on each lane,” confirmed Moore. 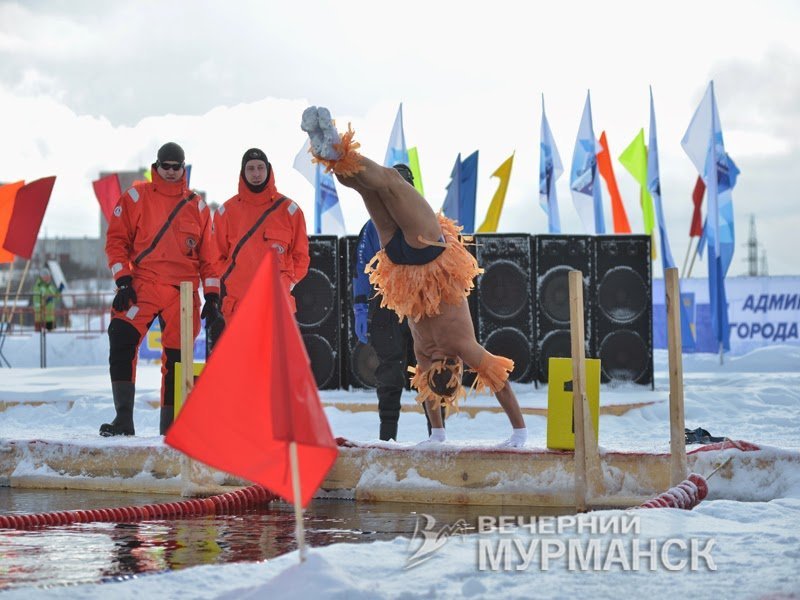 But even with plenty of divers around, the organizers had disallowed some entrants due to insufficient qualifying times. “I disqualified some entries in the beginning based on their time,” Barkai said about the pre-race vetting procedures. 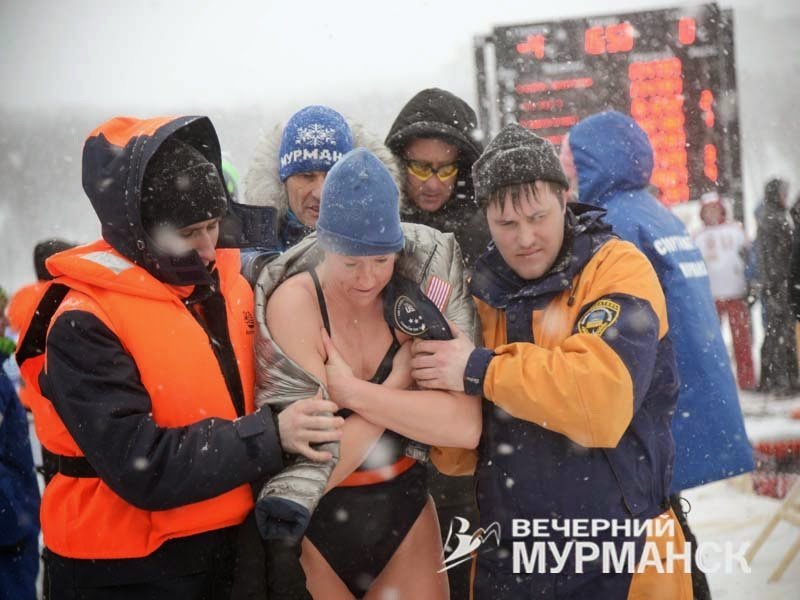 “Because swimmers only sinks when they stop moving, it is easy to identify when the moment is coming. The swimmer’s stroke rate needs to be managed by their seconds [shown above]. Each swimmers had to assign a second to be at their poolside lane. This second – who can only be another experienced swimmer – must be the eyes and ears for the referee. It’s about responsibility; the second is someone who can inform the referee if they feel the swimmer’s behaviour is normal or erratic. Some swimmers look ragged, but this is an expectation [given the conditions].

Additionally, for the 1000m event, entrants need to show that they have at least competed at a 450m distance in other competitions
,” said Moore. 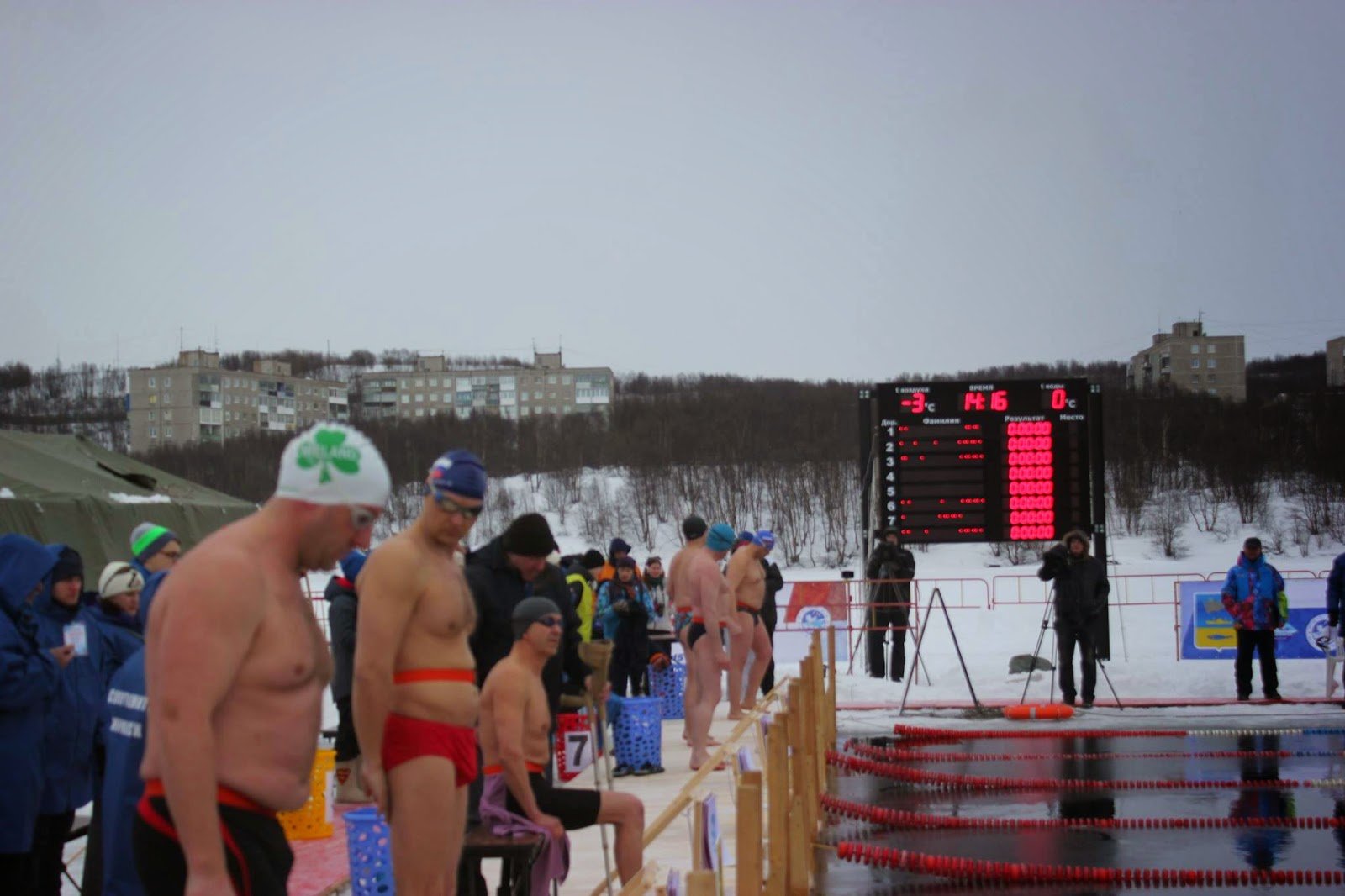 Barkai added, “In addition, every swimmer had a nylon strap or belt around their waist [shown above] so they can be grabbed from above or in the water.” 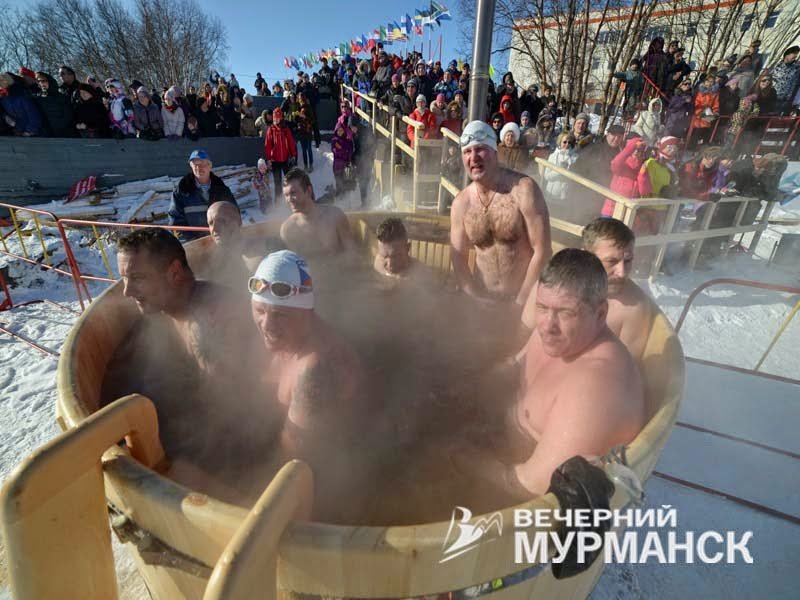 “In the German Ice Swim in January, we all had to swim with a RestTube,” said O’Reilly. “We also had two men for each swimmer on exiting the water to support us. They were all from the ‘MChS’ which is Russian Ministry of Emergency Situations. That’s just poolside. What happens in the sauna is another aspect of the sport.” 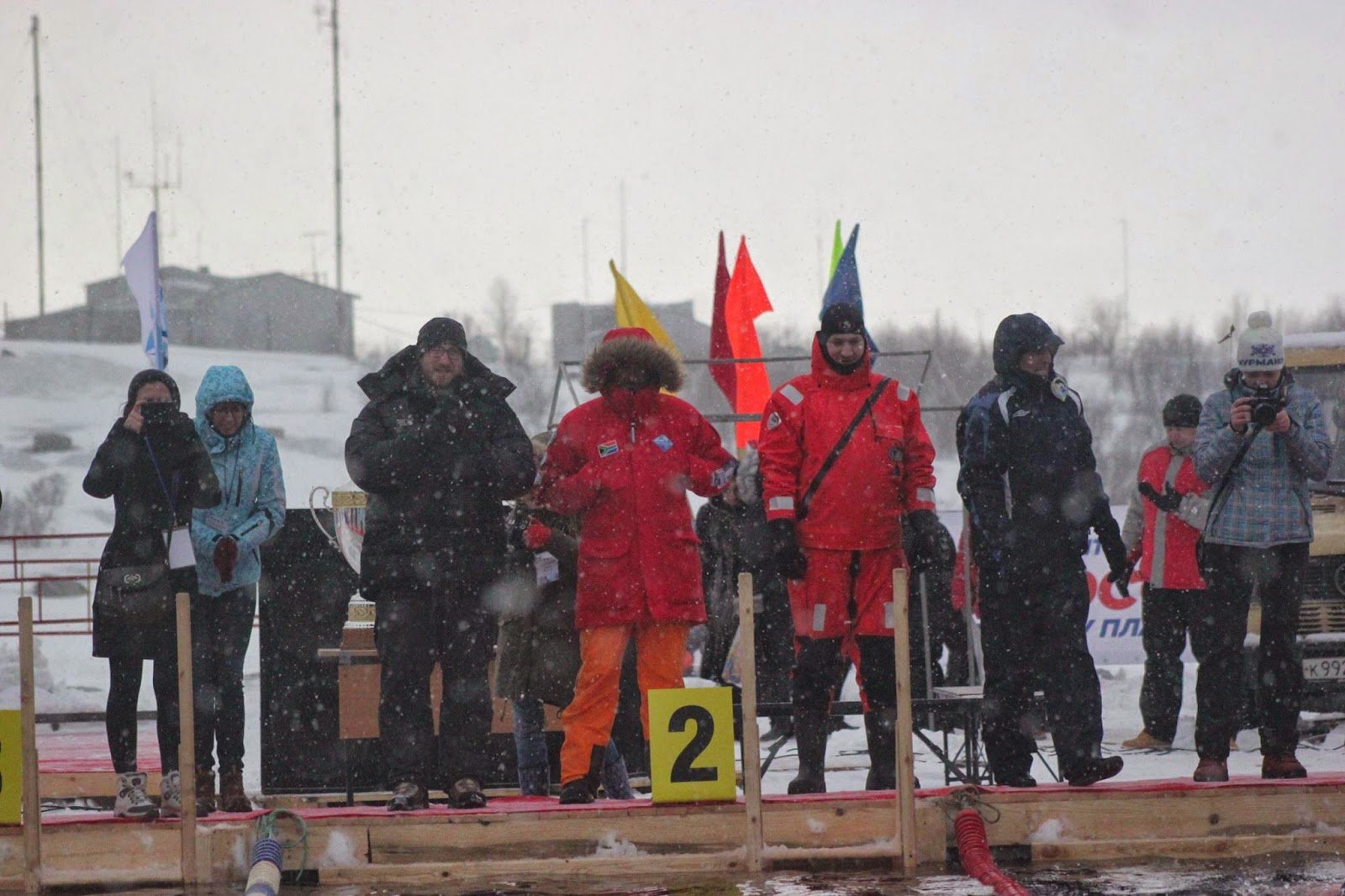 “Plus having the first medical tent at poolside was great,” recalls O’Reilly. “As soon as we were out of the water, we went into a medical tent. A doctor took our pulse to check for any extreme situations and then we were marched to the saunas.”

“There were a few swimmers who experienced drops in blood pressure and several ladies were transferred to the sauna by stretcher,” observed Moore. “But this is best option. There are no benefits to making the body work harder than it does. At the sauna, there were also pulse checks taken before releasing the swimmers.”

O’Reilly explained, “Before racing, during our medical checks they look for elevated heart rates and blood pressure. Just because when you jump into ice, everything skyrockets.”

Barkai described his own condition. “I was fine at my 16 minutes [in the 1000m event]. I sprinted the last 25 meters. It was a slow sprint. My blood pressure was the same on my exit. But it gets messed up later in recovery.”

“But in a rescue situation, all rescue protocols dictate that individuals exit the water horizontal position. So when the swimmer stands up to climb the [poolside] ladder, their blood pressure can drop quickly from the hydrostatic pressure. This is why all rescues are now from the water in the horizontal position,” added Moore [shown below with her support team]. “So when a swimmer stands up too quickly and starts to move their blood pressure can drop and the blood drains. They can pass out. The adrenaline can help them, but in a few minutes they can go down with the cold as well. 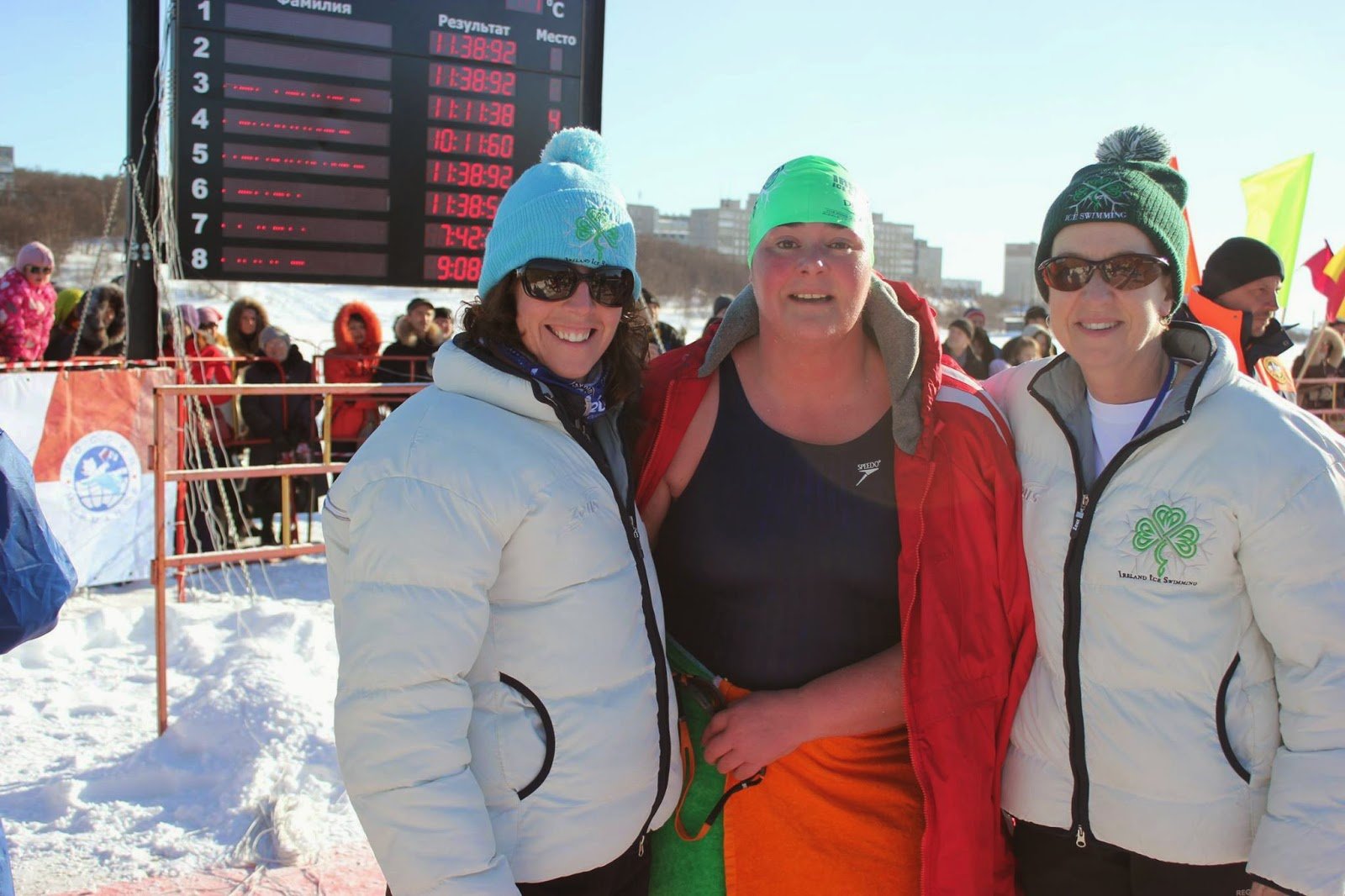 It’s the shift from hozizontal to vertical and the loss of the water from the body that causes this. People have to train for that. The legs do not have any blood because of the cold so when you stand up, the circulation is the same as when you have a dead leg. So standing up is a problem. You can’t put your body weight on 2 dead legs, so you go down. But we a lot of us despite the cold to steady ourselves.”

The full video of the rescue and race is here.