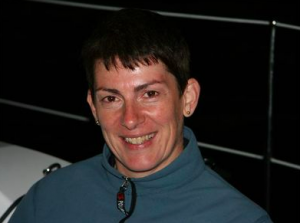 A group of seasoned open water swimmers from Cape Town, South Africa have embarked on a mission to position solo and relay crossings of False Bay as one of the most challenging and desirable swims in the world of marathon swimming. The False Bay Swim is a 34 km open water swim, which compares in length to the English Channel (33.8 km) and other Oceans Seven crossings (e.g., California’s 32.3 km Catalina Channel, Northern Ireland and Scotland’s 35 km North Channel, Japan’s 19.5 km Tsugaru Channel, Hawaii’s 42 km Molokai Channel, New Zealand’s 26 km Cook Strait, and Spain and Morocco’s 14.4 km Strait of Gibraltar) around the world in terms of distance and conditions.

In line with marathon swimming internationally, the False Bay swim has its own rules and regulations with a strong focus on safety and maintaining the integrity of the crossing. The newly launched False Bay Swimming Association (FBSA) will be responsible for the coordination, officiating and promotion of the swim.

All information is available on its new website – www.falsebayswim.co.za.

The vision of the Association is to bring the international marathon swimming world to Cape Town. “We believe the swim has all the required ingredients to be an epic international challenge,” said board member Ram Barkai.  “The FBSA is a non-profit association which will only focus on swims across the bay. This requires a focused effort to promote the swim locally and internationally as well as to regulate and record swims.”

To date, only five swimmers have successfully swum solo across False Bay – three South Africans and two international swimmers. The first successful swim was completed by Belgium swimmer Annemie Landmeters in 1989 [shown above], while the most recent crossing took place in 2012 by Irish swimmer Ned Denison.  The average swim time is approximately 11 hours and the longest so far is 14 hours. The fastest male crossing was done by Barend Nortje from South Africa in time of 9 hours 17 minutes and the fastest female crossing was done by Annemie Landmeters from South Africa in time of 9 hours 56 minutes from Rooi Els to Miller’s Point. There have been more than 24 other crossing attempts by different swimmers over the years, but all of these were unsuccessful due to various reasons.

The first relay team, six South African swimmers, swam across False Bay in 10 hours 2 minutes in April 2019, which ignited the desire to officially establish the swim and promote it internationally.

The Association allows for various categories:

Barkai explains, “The solo skins are regarded as the elite category as the swimmer has no protection against the cold water and has to complete the swim unassisted from one side of the bay to the other. The Association also accredits certified pilots and observes to ensure safety of swimmers and uphold the integrity of the swim.” The first 34 km False Bay Relay Swim across False Bay from Pringle Bay to Buffels Bay near Cape Point was completed in 10 hours 2 minutes in April 2019 by swimmers Ram Barkai, Samantha Whelpton, Jean Craven, Kieron Palframan, Clinton Le Sueur and Patrick Wilke [shown below] with escort pilots Derrick Fraser and Tony Lindeque. The 6-person charity relay started in Pringle Bay at 12.6°C water temperature and continued to drop across False Bay to 11°C water for a majority of the swim where the swimmers encountered seals, jellyfish, blue bottles, and a hammerhead shark deep below.

The crossing season can be any time during the year; however, the swim windows are affected by weather conditions, most notably the persistent South Easter. The best windows are spring and autumn, when the prevailing wind is less frequent. Water temperature can vary from 11°C to 20°C, while unpredictable tides and currents can also pose a challenge to swimmers. Sharks are always a factor in the Cape waters, however, shark sightings have dropped significantly in recent years.

The swim routes are located in deeper waters where sharks are less frequently sighted and the swimmers are required to have shark shields on the boats. 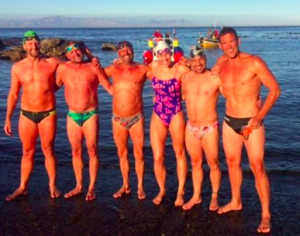 The Association is excited about the potential in bringing famous and yet-to-be-famous swimmers from across the world to attempt its own local English Channel. “Many experienced swimmers out there are looking for new exciting swimming challenges – this swim will be very attractive,” said Whelpton who initiated the first relay across the bay.

“I am so excited about this initiative, the False Bay swim has all the elements that make for an epic open water challenge, and it’s about time the swim becomes a global marathon swimming bucket list item,” said Carina Bruwer who is also on the board and is one of the five solo swimmers who swam across the bay in 2006 in a time of 10 hours 58 minutes.