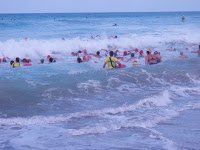 One location which regularly flies under the radar, probably because it is so spread out is Los Angeles, California. The city with Hollywood, Disneyland, Beverly Hills and more drive-thru fast-food restaurants and donut shops than anywhere on Earth als has miles of beaches from Malibu to the Newport Coast.

It is also the training grounds of other luminaries such as Forrest Nelson, Jen Schumacher, Tina Neill, and Cindy Cleveland…as well as many other standout open water swimmers from Gerry Rodrigues, Ashley Twichell and Chloe Sutton to Olympian Haley Andersen.

What advantages does Southern California have for the open water swimmer?

Open water swimmers and triathletes can practice all aspects of their sport:

• body surf at the Wedge in Newport Beach
• swim through the surf zone in Manhattan Beach
• train at high altitude in Lake Arrowhead
• train in the snow and near freezing air and water temperatures in Big Bear
• train in overcast, foggy conditions during many early morning hours
• train in calm fresh water conditions in Lake Castaic
• train in calm salt water venues like Naples Island
• swim with dolphins in Huntington Beach
• people-watch (movie stars) in Malibu or celebrities in Hermosa Beach
• experience everything from sharks to sea lions, jellyfish to kelp
• find swim buddies, paddlers, kayakers and stand-up paddlers any day of the week
• utilize conveniently located parking lots with showers and lighted facilities for night swims