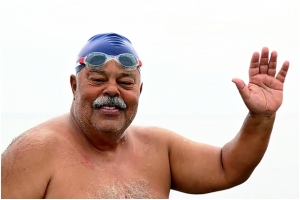 Nejib Belhedi, a 68-year-old Tunisian marathon swimmer and author (Above the Ramparts) has accomplished numerous noteworthy swims during his prolific career. In an act of peace, Belhedi is going to conduct highly risky Speedo Diplomacy during November 2020 in a very troubled part of the world.

Background
Libya is currently undergoing a Civil War with Tunisia bordering its western coast in Northern Africa. The Libyan situation is volatile where armed conflict and geopolitics can unexpectedly and immediately degrade the current situation.

Former Tunisian Lieutenant Colonel Belhedi was a former special operator in the Tunisian military. Prior to a long career as a marathon and channel swimming, he studied in America’s Fort Benning in advance military courses. But he will be navigating the most risky course of his career this November.

Course & Plan:
Belhedi is planning a stage swim over a 10-day period, swimming 10-15 km in 10 different cities, starting in Raj Jdir on the Tunisia-Libya border and ending in Tobrouk in Libya while being supported by the West Libyan and East Libyan armies. They will ensure Belhedi’s security and support him in the sea and also on land with accommodations and transportation.

Threats and Risks
The 10-day stage swim will be conducted in one of the most dangerous areas in the world today.

Goal
Belhedi will carry and hand deliver two letters of peace to the Libyan authorities.

Belhedi wants the 10-city, 10-stage coastal marathon swim to represent a strategic declaration and symbol of peace. He wants to call all sides to enact a cease fire en route to a period of national reconciliation. Throughout the swim, Belhedi will carry letters of peace in a waterproof pouch that he will carry while swimming.

The Olympic Club of San Francisco On The Channel

They Are Missing Bits, But Have Huge Hearts: 5 Legs, 5 Swimmers, 1 Goal