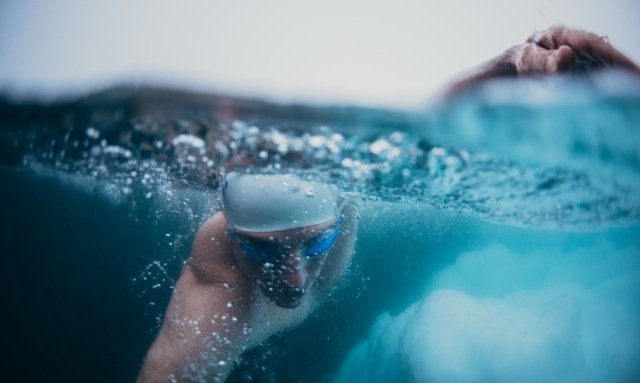 Photo courtesy of Kelvin Trautman in the Southern Ocean.

There have been plenty of dramatic swims around the world that have struck the attention of politicians, government leaders and general public throughout history, but none are as important to the long-term marine environment as Lewis Pugh‘s Five Swims in Antarctica for 1 Reason) and his Speedo diplomacy conducted over the last two years.

While Pugh repeatedly shuttled between Moscow, Washington D.C. and other capitals around the world speaking directly with government leaders and bureaucrats with passion and environmental logic, his dream to help establish a Marine Protected Area in the Ross Sea of the Southern Ocean.

The ultimate goal of Pugh’s Five Swims in Antarctica for 1 Reason in 2015 was to bring attention and push governments to declare the Ross Sea (known as the Polar Garden of Eden) as a Marine Protected Area (MPA). Using a platform of five 1 km open water swims in Antarctica in waters between -1.7ºC and 0ºC (28.9ºF and 32ºF), Pugh had sufficient momentum and a global awareness to push forward his goal at the highest levels of the major governments around the world.

The Five Swims in Antarctica for 1 Reason included the following cold water swims:

Among the individuals who took the time to listen to Pugh’s pleas and reasoning to establish the Ross Sea as a MPA was Russian President Vladimir Putin and his top cabinet members as well as the United States Secretary of State John Kerry and his Under Secretary Catherine Novelli. But there were many more individuals like Russians Slava Fetisov, Nick Bobrov and Sergey Rybakov who also “made a world of difference” said Pugh.

The key issue was to convince the Commission for the Conservation of Antarctic Marine Living Resources (CCAMLR) to accept the premise of a Ross Sea MPA. Russia’s input and support was key in accepting this proposal that had been vetoed by Russia on five previous occasions.

Two years of work finally resulted in exactly what Pugh had envisioned. “I spent those years shuttling back and forth to Russia, speaking with their leadership to encourage them to join the other CCAMLR nations in protecting the Ross Sea,” explains Pugh. “And now they have. This is a very big moment in the history of conservation.

Here’s why: First, at 1.57 million square kilometres, the Ross Sea MPA is the world’s biggest protected area in history. To put it in perspective, it’s bigger than the UK, France, Germany and Italy combined.

Second, as the first large-scale marine protected area in the high seas, the creation of the Ross Sea MPA sets an important precedent. The high seas represent 45% of our planet, and yet they are largely unprotected.

And forth, what makes this achievement even more remarkable is that Russia, the US, the EU and the 22 other CCAMLR nations shook hands in a time of strained political relations

Pugh’s explanation is posted here; Commission for the Conservation of Antarctic Marine Living Resources‘s educational video is below.