Ram Barkai and Theodore Yach, along with all other swimmers, were treated in a medical tent directly after the swim to help restore their core body temperatures to normal. They both described the swim as among the coldest and toughest they had ever undertaken. “It was very, very cold, but we all did it and we feel honored to be able to have been able to do something for this rural community,” said Ram, founder of the world famous Cadiz Freedom Swim.

Theodore described the swim as one of the hardest he had ever undertaken. “For me, it was beyond the outer limits of my ability. I am glad I have done it, but wild horses are going to be needed to drag me to anything close to this again. This re-defines extreme.” 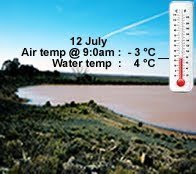 The other mile swimmers included Ryan Stramrood, Kieron Palframan, Toks Viviers and Andrew Chin who all emerged looking dazed after swimming for 30 minutes in the 4°C (39°F) water. Nineteen other swimmers completed the shorter 600-meter swim. “You guys must be mad,” said Herman le Roux, who is setting up the school Destiny Academy, Fraserburg which will benefit from the swim. “[But] if you really put your mind to it, you can achieve anything.”

Race organizer Craig Doonan said, “We’re back from a fantastic event and a real ice swim. There literally was ice on the beach of the dam at the early stages of the event. Temperature was bitterly cold, but we all made it – although some of us were a little shattered afterwards.”

Ram Barkai explained, “I have been dreaming about an event like this for a long time. There is nothing that gives me more satisfaction than seeing other people achieving what they thought was impossible. The first Ice Swim in Antarctica was a life-changing event. I hope it has been the same for all of you. This swim was not just about swimming, it was mainly about showing all of us and the community that hosted us, what is possible if one puts ones mind to it. Just imagine how many other things out there we can do, but believe we can’t.”